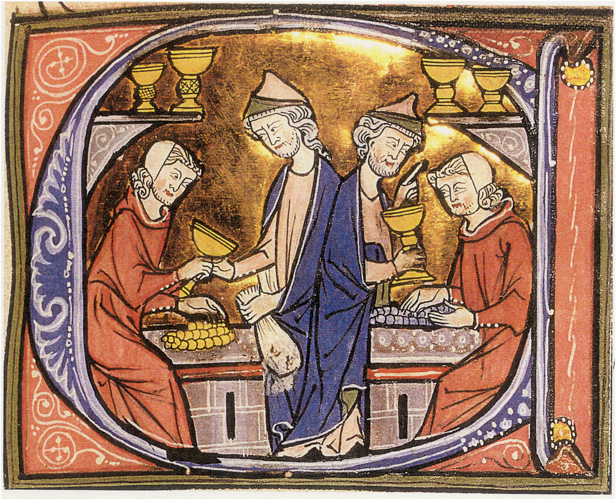 "Medieval banking existed in a moral gray area from the 10th century until well into the 15th century. Before this period, Europe was too poor to support an extensive, morally corrupting banking system. By the end of the 15th century, the major Italian banking houses had learned ways of circumventing Church disapproval in their financial transactions. When they could not find loopholes, they increasingly violated the religious prohibitions.
Read more »
No comments:

Easter in the Primitive Templar Rule

The 77 paragraphs of the original Primitive Rule (1129-1131) hold many details on how the Knights Templars should behave during and between feast days, such as Easter.

Email ThisBlogThis!Share to TwitterShare to FacebookShare to Pinterest
Libellés : Easter

"That the Templars were successful in their initial mission is shown by their quick acceptance into the main body of the Church. By making the Temple a monastic order, the Church brought a dynamic, but also dangerous and potentially heretical group back into its fold. A delicate matter.

Why did the First Crusade prevail?

"Most Crusades historians now believe that the First Crusade prevailed because the Arab world was already disintegrating by the late 11th century. In the first three centuries after Muhammad's death, Islamic and Arab civilization were synonymous. The Arabs dominated an area that encompassed most of Asia Minor, North Africa, Spain, and Southern Europe. Aside from the Byzantines, they maintained the most highly developed civilization in Europe and western Asia at that time. This is not the complete story, however.
Read more »
No comments: