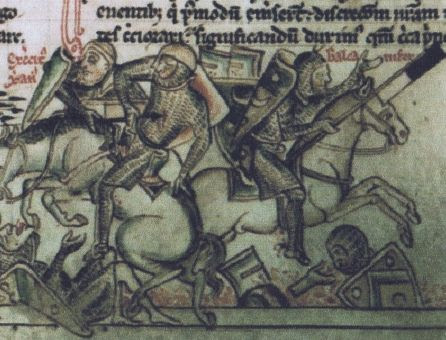 The name baucent, also spelled bausent, bauceant, baussant, beausseant, beauséant etc., in origin is the Old French term for a piebald horse, a horse that has a pattern of spots (white) on a pigmented background of hair. The name was later approximated to the French bien-séant, meaning "decorous, becoming". The name was also used as a battle cry by the Templars, À moi, beau sire ! Beauséant à la rescousse ! (French for "To me, good sire ! Beauséant to the rescue"). The word, however, is more commonly used for the war flag (vexillum belli) used by the Knights Templar in the 12th and 13th centuries.

13th-century sources show it as a white gonfanon with a black band on top ("argent à chief sable" in heraldry terms). The gonfanon was the earliest medieval flag borne in Europe, the word being derived from Old High German: gund: 'battle'; fano: 'cloth'). lt was a rectangle of fabric attached to the stave by one of its narrow sides, usually by means of rings or loops. Îhe fly was either cut into three or more lappets or had streamers sewn on separately. For a sturdier attachment of these streamers the cloth's hem is often shown reinforced by a braidcd ribbon or an applied strip of fabric.

The Templar banner was mentioned in the travel report of an unknown pilgrim who visited Jerusalem some time before 1187. He mentions ""... when they go to wars a standard of two colors called balzaus is borne before them." The French canon regular Jacques de Vitry describes in his Historia Hierosolymitana dated circa 1220 how the black over white flag signified "that they are fair and kindly towards their friends, but black and terrible to their enemies". It should be noted that it is accepted that heraldry at that period was not prone to symbolism and therefore that this interpretation may be wrong.

It appears that later in the 13th century, the red cross of the Templar could be added to the banner. In a damaged fresco of the late 13th century in the Templar church of San Bevignate, Perugia, a Templar banner is depicted with the upper half in white and the lower half in black, with the red cross patty attached to the white field. The same fresco also shows a shield and horse-covers in the same design.

In his article Military Orders of the Holy Land, Chris Gravett (historian, writer and senior curator at the Royal Armouries) describes 12th century flags as either mainly white with a black section at the top like many but nmot all shields, or half white and half black (the black at the top). Both are seen in period sources. Other sources state that a red cross was superimposed over these two areas. All of these are equally likely to be accurate, possibly evolving and changing over time. Note the complete lack of uniformity in these sources.

In the original Rule of the Templars the banner is mentioned many times, for instance in Rules 164 and 164. The text below quotes from these Rules, illustrating the importance of the black and white banner in battle:


When the Marshal takes up the Banner to Charge
164. (...) And then the Marshal should order five or six or up to ten knight brothers to guard him and the banner; and these brothers should overwhelm their enemies all round the banner, to the best of their ability, and they should not leave or go away, rather they should stay as near to the banner as they can, so that, if necessary, they may assist it. And the other brothers may attack in front and behind, to left and right, and wherever they think they can torment their enemies in such a way that, if the banner needs them they may help it, and the banner help them. if necessary.

165. And the Marshal should order the Commander of the Knights to carry a banner furled round his lance, and he should be one of the ten. And this brother should not leave the Marshal, rather he should keep as near to him as possible, so that if the Marshal's banner falls or is torn or any misadventure befalls it, which God forbid, he can unfurl his banner; or if not, he should act in such a way that the brothers may rally round his banner if necessary. And if the Marshal is so badly wounded or afﬂicted that he cannot lead the attack, the one who carries the furled banner should lead the attack. And those who are ordered to guard the banner should go to him; neither the Marshal nor the one who carries the furled banner into battle should charge with it or lower it to charge for any reason.

Adapted from Wikipedia and durhammedievalcombatacademy.org; The Rules are quoted from Upton-Ward (2005), The Rule of the Templars: The French Text of the Rule of the Order of the Knights Templar. The text on shields originates from  livinghistory.co.uk. Illustration top showing A Knight Templar carrying the Order’s piebald ‘Bauceant’ battle standard (at the right). Matthew Paris OSB,Chronica Majora II, MS26II - Folio 171V, 13th century; bottom showing Fragment of the fresco at San Bevignate (c. 1290) showing the gonfanon with a red cross patty. Source for both illustrations durhammedievalcombatacademy.org