"Depictions of the Military Orders’ Martyrs in the Holy Land" - quotes 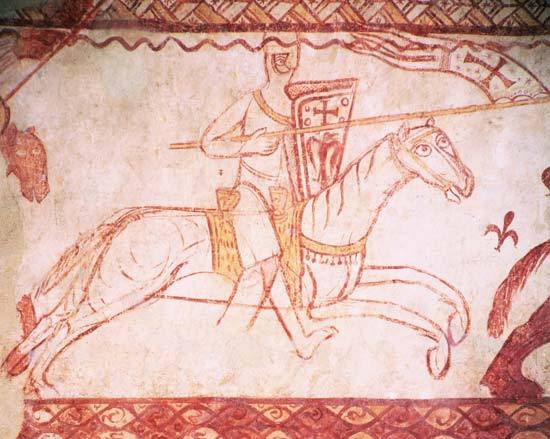 "The military religious orders were founded to fight on behalf of their fellow Christians, in defence of pilgrims and Christian territory. They fought alongside and supported the crusaders in the Holy Land. New members of these institutions took the three monastic vows of poverty, chastity and obedience, underlining that their work was a spiritual undertaking, despite the fact that they shed blood. In an era in which warriors who died fighting non-Christians were increasingly depicted as martyrs, it is not surprising that writers of the 1120s and 1130s associated the first knight-brothers with martyrdom. But as the Franks of the Holy Land met with division and defeat, how far did this imagery continue? Did outsiders continue to depict the brothers of the military orders in this way? ....

Focusing on Latin accounts written within a year or two of events, this survey has demonstrated that some contemporaries explicitly depicted some members of the military religious orders who died in encounters with the Muslims in the Holy Land as martyrs. As the Christian force in each of these encounters was effectively annihilated, leaving no immediate eyewitnesses, these descriptions must have been more or less fictional. None of these accounts were composed by the orders, and the reports which members of the orders wrote immediately after these battles did not claim that their dead brothers were martyrs. It is possible, however, that some information about these brothers’ deaths originated with their orders.

It is tempting to suggest that the paucity of clerical descriptions of martyrdom between the Third Crusade and the final loss of Acre in 1291 was linked to theological anxiety regarding the appropriateness of labelling men who died in combat as martyrs. While groups could be so described, ecclesiastical authors were wary of using the term for individuals. Fidenzio of Padua was happy to use the term for the Templars who died at Saphet in 1266 as they had died voluntarily and passively, but not in battle. However, the fact that this term appeared again in 1291 suggests that another factor was also significant. Each of these depictions of martyrdom was linked to a devastating Latin Christian defeat which threatened or effectively destroyed the Latin Christian presence in the Holy Land. In such circumstances, the authors may have intended such imagery to encourage recruitment to recover the Holy Land. Certainly, as contemporaries in 1291 expected the Templars and Hospitallers to lead re-conquest of the Holy Land, images of the brothers’ martyrdom could have helped to repair their reputation in the West preparatory to a new expedition. What is not clear, however, is how far these orders themselves promoted their own military martyrs: the current state of scholarship suggests that they did not."

This blog quotes the introduction and the conclusions of the paper "Martyrum collegio sociandus haberet’: Depictions of the Military Orders’ Martyrs in the Holy Land, 1187–1291'" by Helen J. Nicholson, rerpinted on www.academia.edu; illustration: Fresco in CVressac Templar Cgurch, France, showing a Templar on Horseback, carrying a standard, source: tvtropes.org