Financing the Crusades - the "lesser men" 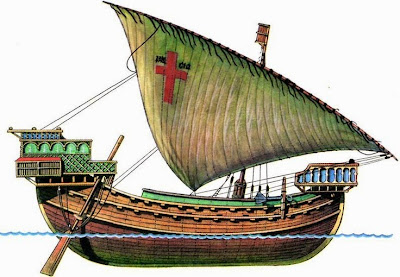 "The communal organization of the "lesser men", the middle classes, revealed itself in their crusades, which took now the character of a huge partnership, now that of a trading company, and now that of a state enterprise.

Although the Italians were the most famed participants, they were not the only middle-class crusaders. From the first, expeditions of northern mariners made their way by the Strait of Gibraltar to the Holy Land: men of the British Isles, the Low Countries, Germany, even Scandinavia... The crusaders came from both sides of the North Sea and the English Channel, in large part the sailors of those seas, men neither of the chivalry nor of the peasantry. Like a commune, they elected their leaders and made policies in council and assembly...

The crusaders from the Italian cities organized their sacred expeditions like trading ventures. To participate in the First Crusade the Genoese nobles and merchants formed a compagna on the model of their earlier expeditions against the Moslems. The ships were provided and outfitted by subscription; each man who subscribed or went on the crusade had a certain financial interest in the profits or losses. When the expedition ended after the capture of Caesarea, the booty was divided according to the shares held by the members in the compagna."


Quotes from Zacour, N. P.; Hazard, H. W. (ed.) / The impact of the Crusades on Europe (1989), Chapter IV, "Financing the Crusades". The quotes presented here focus on the situation in the first half of the 12th century. Illustration: Crusader vessel  from this source