The Equestrian Order of the Holy Sepulchre of Jerusalem, Templar predecessor? 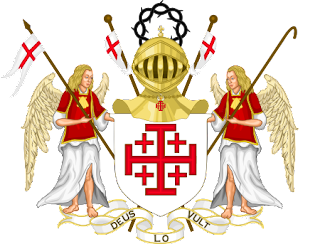 Recently, I stumbled on the following article on Wikipedia, regarding the Equestrian Order of the Holy Sepulchre of Jerusalem. This blog quotes freely from this article.

The order’s early members included not only the Regular Canons (Fratres) but also the Secular Canons (Confratres) and the Sergentes. The latter were armed knights chosen from the crusader troops for their qualities of valour and dedication; they vowed to obey Augustinian Rule of poverty and obedience and undertook specifically to defend the Holy Sepulchre and the holy places, under the command of the King of Jerusalem.

After the fall of the Kingdom of Jerusalem, the right to create new Knights was the prerogative of the representative of the highest Catholic authority in the Holy Land: the Fransiscan Custos of the Holy Land.

In 1496, Pope Alexander VI ordained that the office of Grand Master would be vested in the papacy. In 1847, the Latin Patriarchate of Jerusalem was re-established by Pope Pius IX and the order was reorginised. From 1949, Cardinals have been Grand Masters and the Pope remains Sovereign of the order, which thus enjoys the protection of the Holy See. Its headquarters is at Palazzo Della Rovere in Rome, close to the Vatican City.[3]

Pilgrimages to the Holy Land were a common if dangerous practice from shortly after the crucifixion of Jesus to throughout the Middle Ages. Numerous detailed commentaries have survived as evidence of this early Christian devotion. While there were many places the pious visited during their travels, the one most cherished was the Church of the Holy Sepulchre, first constructed by Constantine the Great in the 4th century AD.

The date of establishement of this order and the information in several sources that suggest that the knights that were later to found the Order of the Knights Templar were in a way related to the canons (or may well have been, at a time, canons themselves), suggests that this order may have been the predecessor of the Templar Order. A predecessor that, it seems, continued to exists, uninterrupted, for nine centuries now.