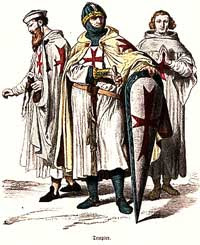 "In October 1307, by order of Philip IV of France, all the Knights Templar within the French domains were arrested. (...) During the trial of the Templars witnesses claimed that the order's abuses had been notorious for many years and under interrogation, including torture, many brothers confessed to at least some of these crimes. In March 1312, Pope Clement dissolved the Order of' the Temple, giving its property of the Order of the Hospital, and assigning the surviving brothers to other religious orders. Despite this, the question of the order's guilt has never been settled. (...) What did contemporaries think about the other military orders, such as the Knights Hospitaller and the Teutonic Knights?
The Order of the Temple was a military order, a type of religious order (...)The concept of the military order was a natural development from the concept of the crusade. Rather than taking up weapons for a short period to defend Christ's people, the members of a military order did so for life. In return, they expected to receive pardon for their sins and immediate entry into heaven if they died in action against the enemies of their faith.

In western Europe, far from the battlefield, some of the clergy were doubtful whether a military order could be a valid religious order. Around 1150, the Abbot of Cluny wrote to Pope Eugenius III that he and many of his monks regarded the brothers of the Temple as only knights, not monks, and believed that fighting the Muslims overseas was less important than suppressing bandits at home. Letters written to encourage the early Templars also hint at this sort of opposition. But the bulk of the surviving evidence is warmly in praise of the Templars, and clergy and knightly classes alike welcomed the new order with generous donations. In fact the Hospital of St John seems to have attracted more donations as it became more of a military order. By 1200 the military orders had become part of the religious establishment and criticism of the concept ceased. "

This blog quotes from a paper by Helen Nicholson, published in History Today Volume: 44 Issue: 12 1994 source. Illustration showing Knights Templar from this sorce.