Ordines Militares - Yearbook for the Study of the Military Orders 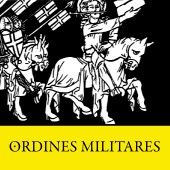 The journal Ordines Militares Colloquia Torunensia Historica follows a fifteen-volume book series containing papers from international conferences devoted to the history of military orders “Ordines militares. Colloquia Torunensia Historica”, which have been organized in Toruń every two years since 1981. Thanks to the research done by Professor Karol Górski and his students, the Institute of History of Nicolaus Copernicus University (created in 1945) became the most important Polish centre for research on the history of the Teutonic Order and the Teutonic State in Prussia.

The idea to create an international forum of researchers of military orders in Toruń resulted from the cooperation between Polish and German historians established during conferences organized since 1974 under the auspices of UNESCO, and devoted to the role of the Teutonic Order in history textbooks.

The founder of Toruń’s meetings of researchers of military orders and the editor of the first eleven volumes from the series “Ordines militares” was Zenon Hubert Nowak from the Institute of History and Archival Science of Nicolaus Copernicus University in Toruń. After his death in 1999 Roman Czaja from NCU and Jürgen Sarnowsky from the University of Hamburg took over the organization of conferences and the edition of the series.

The subject of the first volumes from the series “Ordines militares. Colloquia Torunensia Historica” centred around the history of the Teutonic Order; however in the beginning of the 1990s the thematic scope started to include the history of the Hospitallers, the Knights Templar and orders set up in the Iberian Peninsula.

Both the thematic scope of the conference and the growing number of participants have contributed to the fact that the conferences from the series “Ordines militares” have become one of the most important forums for meetings of researchers of military orders from all over the world. The meetings of young researchers dealing with the history of military orders constitute an important element of Toruń’s conferences organized since 2003.

The growing academic prestige of the series “Ordines Militares. Colloquia Torunensia Historica” led to its being transformed into a yearbook devoted to the history of military orders. In keeping with tradition, each volume includes a definite thematic scope, which refers to the subject of a conference from the “Ordines militares” series. Moreover, articles, polemics, research surveys, source monographs and reviews concerning the history of military orders are published there in English, German and French.

source text and illustration www.ordinesmilitares.umk.pl
Support TemplarsNow™ by becoming a Patron, tipping us or buying one of our Reliable Books