The Temple at Zaamslag, The Netherlands 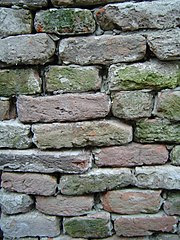 The Temple of Zaamslag or Tempelhof was a Commandery of the Knights Templar, located at Zaamslag, a village in the south-west of the Netherlands. It is a very important archaeological site.

The Tempelhof emerged around the thirteenth century, but dating of the stones of the walls indicate an origin from the second half of the 12th century. The Commandery must have been quite large, as it turns out from historical sources. In 1282 the Templars were endowed with lands by Gerard van Maelstede. In 1288 they got another donation.

Usually a Commandry was square to rectangular, surrounded by an earthen shore and a moat. The main building probably had two floors. Like many other Commandries the Temple of Zaamslag also had a chapel.

Near the Temple stood the Hospital of Zaamslag, that was listed in sources from 1310 onwards. Previously, the hospital might be the leper colony of the commandry, approximately 100 metres away. Since the year 2007 an international group of historians and archaeologists investigating the complex der Knights Templar to. A part of the Historical Archaeology Foundation and researchers belongs to the circle around Jan Hosten, VSTH (Association to study of the Knights Templar and Hospitallers).