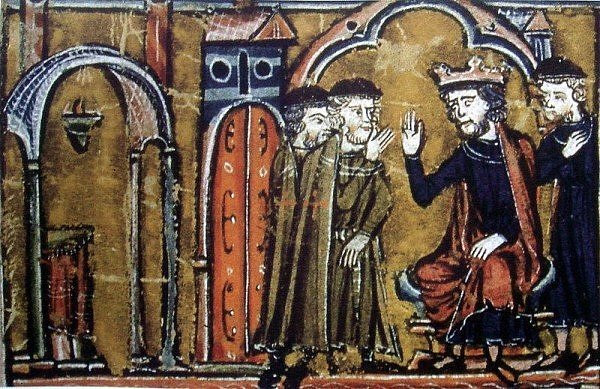 According to chroniclers of their early years, the Knights Templar were founded in 1118 by Hughes de Payen, a vassal of the Count of Champagne. In 1118 Baldwin I was King of Jerusalem. The older brother of the King, Godfroi de Bouillon, had been one of the leaders of the first Crusade (1096–1099) that had lead to the conquest of Jerusalem from the Muslims in 1099.

The group around Hugo de Payen, all related to each other by either blood or marriage, proposed themselves to King Baldwin I as an order of fighting monks, who would protect the roadways for pious pilgrims journeying to Jerusalem. They were given an entire wing of the royal palace as their headquarters, a wing that had been built upon the foundations of the Temple of Solomon. Thus they received their name: "the Knights of the Temple." The Templars made use of the numerous tunnels known to exist beneath Solomon's Stables on the Temple Mount. This use stands at the origin of many myths on treasure being searched for and found by the Templars at the temple site.

During the first nine years of their existence the Order admitted no new members. Furthermore, there is no evidence from contemporary chroniclers indicating that they engaged in the activities for which they were founded: the protection of pilgrims journeying to Jerusalem. Nevertheless they became famous throughout Europe as the selfless "Militia of Christ."

By 1127, most of the original Knights had returned to Europe. In 1128 Saint Bernard of Clairvaux, Andre de Montbard's uncle and abbott of the Cistercian monastery of Clairvaux, published on request of Hughes de Payen a pro-Templar tract entitled In Praise of the New Knighthood. In this tract Saint Bernard stresses the in those days new combination of monkhood and knighthood when he writes: "But when the one sees a man powerfully girding himself with both swords and nobly marking his belt, who would not consider it worthy of all wonder, the more so since it has been hitherto unknown? He is truly a fearless knight and secure on every side, for his soul is protected by the armor of faith just as his body is protected by armor of steel."

At the Saint Bernard-inspired Council of Troyes the same year, the Church officially recognized the Templars as a religious and military order dedicated to the defense of Christendom.