Praise of the new Knights Templar (1128) 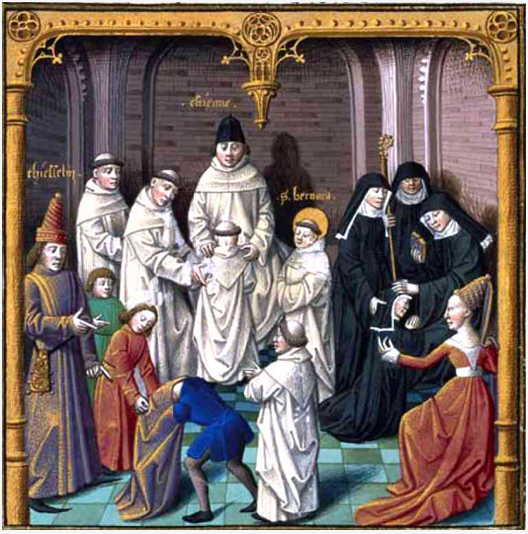 In 1128 Saint Bernard of Clairvaux, Andre de Montbard's uncle and abbott of the Cistercian monastery of Clairvaux, published on request of Hughes de Payen a pro-Templar tract entitled
In Praise of the New Knighthood.

In this tract Saint Bernard explains the objective of the new Order of the Knights of the Temple and sets it as an example for "normal knighthood". Some quotes:

On the practice of normal knighthood:


What else is the cause of wars and the root of disputes among you, except unreasonable flashes of anger, the thirst for empty glory, or the hankering after some earthly possessions? It certainly is not safe to kill or to be killed for such causes as these.

On the right of Knights Templar to kill pagans:


If he kills an evildoer, he is not a mankiller, but, if I may so put it, a killer of evil. He is evidently the avenger of Christ towards evildoers and he is rightly considered a defender of Christians.

I do not mean to say that the pagans are to be slaughtered when there is any other way to prevent them from harassing and persecuting the faithful, but only that it now seems better to destroy them than that the rod of sinners be lifted over the lot of the just, and the righteous perhaps put forth their hands unto iniquity.

On their behavior in battle:


Thus in a wonderous and unique manner they appear gentler than lambs, yet fiercer than lions. I do not know if it would be more appropriate to refer to them as monks or as soldiers, unless perhaps it would be better to recognize them as being both. Indeed they lack neither monastic meekness nor military might. What can we say of this, except that this has been done by the Lord, and it is marvelous in our eyes. These are the picked troops of God, whom he has recruited from the ends of the earth; the valiant men of Israel chosen to guard well and faithfully that tomb which is the bed of the true Solomon, each man sword in hand, and superbly trained to war.

On their settlement at Temple Mount:


Moved therefore by their King's example (Jesus expelling by whip merchants from the temple, as is described in the Gospel; TN), his devoted soldiers consider that it is even more shameful and infinitely more intolerable for a holy place to be polluted by pagans than to be crowded with merchants. Once they have installed themselves in this holy house with their horses and their weapons, cleansed it and the other holy places of every un-Christian stain, and cast out the tyrannical horde, they occupy themselves day and night in both pious exercises and practical work. They are especially careful to honor the temple of God with zealous and sincere reverence, offering by their devout service, not the flesh of animals according to the ancient rites, but true peace offerings of brotherly love, devoted obedience and voluntary poverty.