The Templar admission ceremony: secret or not?

"The eighty-eight charges against the Templars which were used as the basis of interrogations in the proceedings against the Templars in the British Isles, 1309–11, included the charge that admissions into the Order were secret, and that only brothers of the order were present. What are the facts?
Read more »
No comments:

The population of the Holy Land during the Crusading period It is often thought that the crusaders in the different crusader states in the Holy Land were a tiny Christian elite ruling over predominantly Muslim populations. The facts are different.
Read more »
No comments:

"In medieval times, European Christians had some access to information about real Muslim practices, but instead chose to believe in their own fantasies (regarding those Muslim practises). Many neo-Templars, confusing the fantasies of medieval Christians about medieval Muslims with reality have tried to emulate the medieval Templars.
Read more »
No comments:

Bernard de Clairvaux - the Cistercian promotor of the Templars

"The paths of the Cistercians and embryonic Templars crossed in the person of St. Bernard de Clairvaux. Bernard was the most famous churchman of a century that experienced a religious renaissance not seen since the reign of Charlemagne. He had already raised the Cistercians to greatness with his preaching when he encountered the Templars. He was a master propagandist, mostly because he believed everything he said, however contradictory.
Read more »
No comments:

Email ThisBlogThis!Share to TwitterShare to FacebookShare to Pinterest
Libellés : Bernard of Clairvaux

Crusaders and Mongols: friends or foes?

In popular Templar literature from time to time publications suggest that there were friendly relationships between the Mongols and the Crusader Christians. Some sources even propose that Jacques de Molay, the last Templar Grand Master was a Mongol warlord. What are the facts?
Read more »
No comments:

Godfrey of Bouillon (French: Godefroy, Dutch: Godfried, German: Gottfried, Latin: Godefridus Bullionensis; 18 September 1060 – 18 July 1100) was a French nobleman and pre-eminent leader of the First Crusade. First ruler of the Kingdom of Jerusalem from Juy 22, 1099 to July 18,1100, he avoided the title of king, preferring that of princeps or Defender of the Holy Sepulchre.

Email ThisBlogThis!Share to TwitterShare to FacebookShare to Pinterest
Libellés : 1099, Defender of the Holy Sepulcher, Godfrey of Bouillon

The Templar navy - the later years

It is probably no coincidence that the Templars developed their own fleet shortly after the Fourth Crusade (1202–1204), breaking the Italian monopoly. This was fortunate, since it coincided with the decline of naval power in the Islamic world.
Read more »
No comments:

The Templar Order - not a monolithic entity 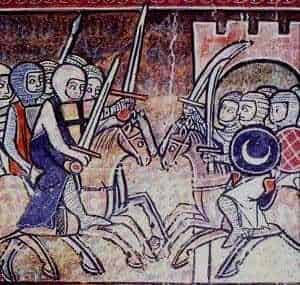 "The Templar Order was not the monolithic entity which the dearth of internal documents -due to time, neglect, and the violence of its suppression- may imply. At least two extremes vied for control within the Order.
Read more »
No comments: