TemplarsNow™ invites you to come and discover the beauty and history of the country of origin of the Knights Templar: France. During the summer months we offer private, tailor made trips to the historical Templar sites that interest you the most. To guarantee that, we work closely with you, researching and designing a one-of-a-kind trip to Templar France that suits you perfectly.

If you
Then TemplarsNow™ Trips is the thing for you

You may choose to visit the Champagne area, the place of origin of many early Templar Knight. See the city of Troyes, seat of the Count of Champagne, who in 1125 forsake his temporal function and duties to join the Templar Order in Jerusalem as a simple knight.

Or go to the nearby village of Payns, birthplace of the Orders first Master Hughes de Payns ( c 1070 - 24 May 1136), who established the Templar Order in Jerusalem around 1120. Payns is also home of a charming museum on the Knights Templar and the site of the first Templar Commandery. In the surroundings there are other Templar sites that may be visited as well.


The Cistercians: the Templar Inspiration You may also choose the inspirational approach, and visit the birthplace of the Cistercian Order at Citeaux Abbey, which still is a functioning convent. There are always other Cistercian and Templar sites that can be visited along the way.
Or go to the site of Clairvaux Abbey, the fourth daughter house of Citeaux, and the home of famous abbott, theologian and religious politician Bernard of Clairvaux. Bernard was the author of the 1136 pamflet "In Praise of the New Knighthood", aimed to promote the fledgling Templar Order.

If your special interest focusses on Templar sites in or near French towns such as the city of Paris (the main seat of the Knights Templar in Europe during the Middle Ages) or Clermont Ferrand (the place where in 1095 the first Crusade was proclaimed by pope Urban II), special trips can be designed following your wishes.

Or you may choose to visit the mysterious Occitanian region of south-west France, with its bloody history of "heretic" Cathars. Including impressive places of interest such as the Cathar's last stronghold Montségur Castle, and the Templar linked enigmatic village of Rennes-le-Chateau. 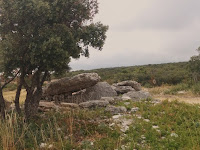 Your Templar trip may be combined with visiting sacred and magical sites such as ancient caves, springs and wells or megaliths, for instance menhirs (standing stones) and dolmen.

Enjoy impressive pilgrimage churches as well as small medieval chapels, lying isolated in the country side. Both have inspired people for ages. Be inspired yourself!
Food and Wine

In all cases your visit may be combined with spending quality time tasting the local wine and cuisine. Visit vineyards and specially selected restaurants along the route, even Michelin Star ones.

Or, just for the contrast, choose to share your workman's "plat du jour" and "vin de table" with locals and visiting artisans in characteristic village taverns.

On Demand, Tailor Made

During the summer months we design tailor made trips on demand, following the specific wishes of clients.

Our services may be limited to a specially designed, well documented half or one day itinerary presented in an E-book. The same trip may be guided in person, using the clients' own transportation. Or it can be as extensive as a fully arranged multiple day trip, with guiding, entrance fees, transportation, meals and accommodations included. And everything in between.


Our guides usually master several languages, at least English and French, and are often locally based. They are well acquainted with Templar history, culture and traditions in general and those of the sites visited in particular.