In his book Hugues de Payns en Orient (2019), François Gilet investigates many primary and other sources, after which he reaches a detailed renewed reconstruction of the founding years of the Knights Templar. Confronting all of the chronicles allows him to develop a synthesis of the beginnings of the Temple Order and to move the genesis of their predecessors, today called "proto-Templars", to the year 1115.

Towards 1115, at the request of King Baudouin II and probably of also Warmund, Patriarch of Jerusalem, about thirty knights unite to participate in the protection of pilgrims. They choose Hugues de Payns as coordinator of operations. The year before (1114), Hugues, after several visits to the Holy Land in the party of his suzerain Hugues Comte de Champagne, had settled permanently in the Holy Land. The mission assigned to this group of knights is the protection of pilgrims at Atlit Pass (Petra Incisa), a particularly dangerous stretch of the coastal road that leads from Acre and Haifa to Jerusalem. Because of its setting, a narrow, unavoidable road in a crevasse in rocky terrain, this site remained prone to attacks from brigands. The group of proto-Templars builds or occupies# a strengthened tower their, the Tour des Destroit (Destroit Tower), of which the footprint and layout are still clearly visible today at Khirbet Qarta (Dustrey)*. It remained so until in 1218 when the Knights Templar began building a castle on a nearby coastal promontory, Chateau Pèlerin, also known as Atlit Castle, after which Destroit Tower was demolished. Atlit castle still is a major historical Templar ruine. 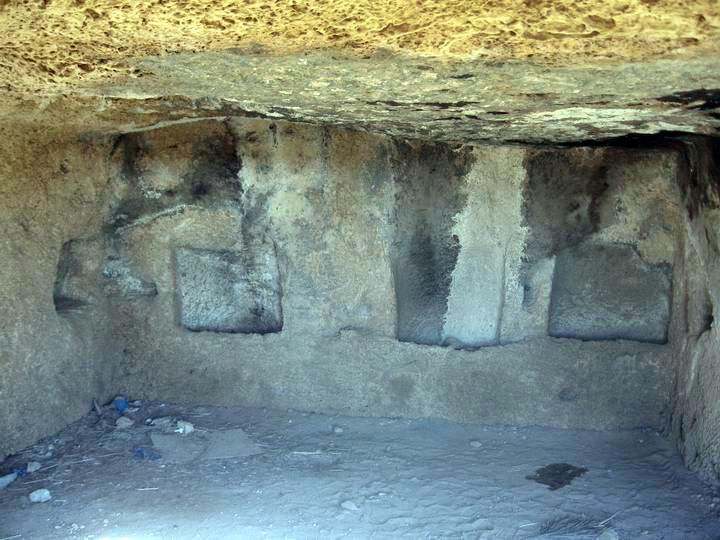 So it was already in 1115 that, for a period of about three years, they put themselves under the protection of the Patriarch and the Augustinian canons of the Holy Sepulchre. The group, called Poor Fellow-Soldiers of Christ, adopted the Augustinian Rule of these canons, and took vows of poverty, chastity and obedience. In the meantime they retained their status of lay people. This initial mission proved a success. Based on that the king then asked them to put their military experience no longer only in protecting the pilgrims at the crossing at Atlit Pass, but also to come and join the troops that ensured the defense of the Latin States as a whole. Their new mission distances them from the canons of the Holy Sepulchre and makes them to adopt gradually a specific rule of life that reconciles their dual role as religious people and warriors.

Around 1118-1120, these "proto-templars" settle in Jerusalem, leaving a garrison at the Destroit Tower. They link themselves to the prior of the Holy Sepulchre. The king installs them on the Temple Mount and the canons of the Templum Domini welcome them in their church, now the Dome of the Rock, for their ofﬁces. They adopt the name of Poor Fellow-Soldiers of Christ and of the Temple of Solomon (Latin: Pauperes commilitones Christi Templique Salomonici). This mutation possibly being approved at the Council of Nablus in January 16, 1120, although no proof of that is to be found in the minutes of the meeting. To ensure their subsistence, the king and the patriarch give them property and annuities. In order to promote their integration in Jerusalem, they become "donates''@  to the Hospitallers of St John, which assures them material support in the form of sustenance.

# The German Wikipedia suggests that the relatively small castle was built at the latest in 1103 on the ruins of an ancient predecessor complex which. This early date is improbably because in 1103 King Baldwin I was ambushed at the site which does not suggest protection present. This incident may well have triggered the construction of a guardpost in subsequent years. * Qarta or Certha: the Canaanite name of Atlit. Dustrey: from French: La Destroit, districtum – a narrow passage. This name was due to the narrow passage cut into the rock, letting the Oren creek flow through the blocking sandstone ridge. The passage, cut probably in the Roman times, dredged out the waters from the swamps east to the site. @ "Donates" are men and women who associated with a religious Order out of piety and with the intention of participating in its benefits, but who did not partake in the religious life of the Order or wear a habit (after Jochem Schenk "Templar Families", p 58)

Translated from French and adapted by TN from Hugues de Payns en Orient by François Gilet (2019). Illustration top: Tour de Destroit, Atlit, source Wikipedia CC BY-SA 3.0; Illustration middle: Rock cut stables at Destroit castle, where the horses were tied to the wall, using holes cut into the wall, and the hay and water was laid in the rock cut holes. source: www.biblewalks.com