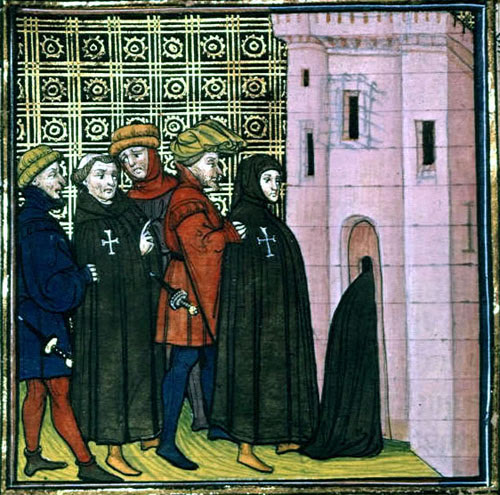 In this order Philip lamented:

"A bitter thing, a lamentable thing, a thing which is horrible to contemplate, terrible to hear of, a detestable crime, an execrable evil, an abominable work, a detestable disgrace, a thing almost inhuman, indeed set apart from all humanity"

Philip charged the Templars with heresy, blasphemy, and homosexuality. He urged other rulers to follow suite, for instance by a letter dated October 26, 1307 to James II of Aragon, a plea supported by the bull Pastoralis praeeminentiae, issued by Pope Clement V on November 22, 1307.

This event started a periode of many years of imprisonment and often severe torture of many Templars in France as well as in England (January 1308) and Ireland (February 1308). During these years many of the French Templars, under threat or actual suffering of torture, confessed to the alleged crimes, answering to the list of 127 articles of accusation put forward. This list had been drawn up at an August 1308 meeting at Poitiers between the pope and the king.

In the end all investigations of both worldy and ecclasistical (e.g. papal) tribunals led to the conviction and occasional burning of templars who did not confess and the defusing of those templars who did confess and repent by obliging them to enter a monastery or another Order. With the Papal bull Vox in excelso, Pope Clement V in 1312 formally dissolved the Order of the Knights Templar, effectively removing Papal support for them and revoking the mandates given to them by previous popes in the 12th and 13th centuries. By means of the bull Ad providam the Pope essentially handed over all Templar assets to the Hospitallers, with the exception of some resources which were left to provide pensions to some Templars who had escaped execution and converted to a monastic life.

The trials are well documented by their records which were investigated by many scientists. For instance, Malcolm Barber's classic The Trial of the Templars (2006) recounts the dramatic demise of the Templars and endeavours to tackle the unresolved controversies surrounding the consequences of the trial, and includes discussions in the context of new work on the crusades, heresy, the papacy and the French monarchy. Helen Nicholson, in her The Proceedings Against the Templars in the Britisch Isles (2011), presents in Latin, translates in English and interprets the full trial records of the British Isles. Most recently Alain Demurger's The Persecution of the Knights Templar: Scandal, Torture, Trial (2019) follows the everyday reality of the trial, from the early days of scandal and scheming in 1305, via torture, imprisonment and the dissolution of the order, to 1314, when leaders Jacques de Molay and Geoffroy de Charnay were burned at the stake. Through first-hand testimony and written records of the interrogations of 231 French Templars, this book illuminates the stories of hundreds of ordinary members, some of whom testified at the trial, as well as the many others who denied the charges or retracted their confessions.

However accurate and descriptive these monumental scientific studies are, they focus mainly on the scientific facts, as they should. They are not intended to describe how people, the Templars concerned in the first place, experienced, felt about and dealt with what happened. For this historic novels may come to the rescue, as far as they are sufficiently based on historical data. A good example for such a novel is Non Nobis by Hanny Alders. A coming blog will go into this novel.

Support TemplarsNow™ by becoming a Patron, tipping us or buying one of our Reliable Books1