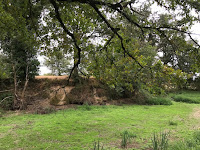 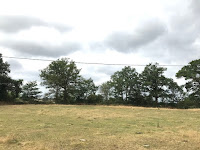 One of the less well known Templar sites of the Allier Department, France, is the "motte" at Richemont (Municipality of Bizeneuille). What does this site look like?

It is a circular platform, called The Chapels, which once was the foundation of a castle that belonged to the Templars and then to the Hospitallers of Saint John of Jerusalem.

It is said that the location of the quadrangular castle can be recognized on the ground thanks to the vegetation. This was not the case when TemplarsNow visited the site on August 2, 2020. At the time the site was used as a cattle pasture, as far as possible because of the drought.

In 1242, Guillaume de Richemont was one of the signatories of a Montluçon charter.

Richemont is also mentioned with Magnet as a Templar possession, in 1279. On this date, François de Bort, tutor of the Militia of the Temple in Auvergne, recognizes that Robert comte d'Artois, and Agnès Dame de Bourbon, have written off half of the forest of Magnet acquired by the Order of the Temple, but in reserving high justice for the men of the Temple who live in the village of Magnet at the Domaine du Temple à Magnet (act 657).


Text (translated from French) based on this site; Pictures made by TemplarsNow, August 2, 2020.