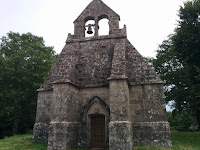 Chapels are today the most iconic remains of Templar buildings in France. Sometimes alone in their village or in the open countryside, they have long attracted the attention of art historians. The myth of the primacy of round churches which has only been documented for the Temple in Paris, Laon and perhaps Metz in France, has now been disproved. What was the common design of Templar chapels?

The most recent regional studies have found that the brethren did not necessarily seek to develop their own architecture and used a style that is rightly described as “simple and practical.”

Most Templar chapels were rectangular buildings with a few bays and a single nave, although of  course there were variations on this theme. For example, the chapels were not all the same size and, with a length from two to five bays, they could measure barely ten meters or more than thirty. The chapel choir, which was originally semicircular as at Arville and Jalès, or flat and pierced with a triplet at Coulommiers, Avalleur, and Fontenotte, became polygonal in the thirteenth century, in particular at Épailly and at Villedieu-lès-Maurepas.

Finally, broken barrel vaulting was long used, as at Clisson or in the Angoumois grou, and later integrated sharp edges or lierne vaults as in the Limousin, at Paulhac, Blaudeix and Chamberaud. Rarely as richly decorated as at Cressac or at Montsaunès, Templar chapels participated in a Romanesque style that was rather sober. Yet in several cases, the brethren showed that they knew how to innovate by employing the Gothic style, first probably in an urban context at La Rochelle and at Avignon in the mid-thirteenth century, then in more prosperous rural areas at Baugy, Renneville and Saint-Vaubourg in Normandy, and at Saulce d’Island in Burgundy.