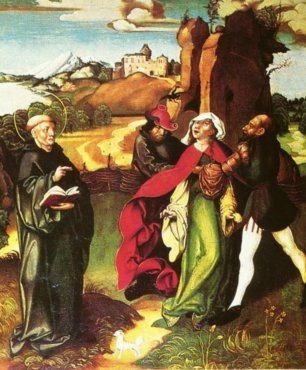 The Cistercian Order, and especially Clairvaux abbot Bernard (1091-1153), was essential in creating the Templar Order. The Vitae of Saint Bernard was written to promote Bernard's sainthood and may have been idealised. Effectively, as Bernard was canonized by Pope Alexander III as soon as 18 January 1174, so only 20 years after his death. What do the Vitae tell us about his views, convictions and way of life?
Bernard seems to have been a very stubborn man, focussed only on the salvation of his own soul and those of others.That is the reason that he considered knigths, who's souls were condamned any way because of their brutal profession, had only a chance of redemption when they fought the good cause for Christ. So firstly he provided the Templars with a mainly monastic Rule (1129), in that way literally bringing them under control.

Then, after much hesitation, he wrote "In Praise of the New Knighthood" (about 1136), in which he compared the Knights Templar with the regular knights of the age. He criticized the ordinary knights for their vanity, wanton violence, and pointlessness. In contrast, he praised the Templars as noble, following a higher calling, fearless, and holy, in that way at least working on the salvation of their otherwise lost souls. In that he condoned and even supported the Knights Templar. That lead in turn to wide support in circles of nobility and the (partly also militarized) clergy, and in consequence many mainly landed donations and new recruits from those circles.

For the Vitae in French go to this site. Illustration: Bernard exorcising a possession, altarpiece by Jörg Breu the Elder, c. 1500, source: Wikipedia