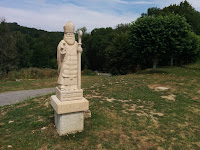 "Among the devotional objects mentioned in the inventories (made during the trial investigations 1307-1312, TN) relics and reliquaries feature prominently. (...) One devotional trend that the Templars, especially in southern France, seem to have picked up was that of the fourth-century martyr St Blaise, bishop of Sebastia.

Saint Blaise was remembered and venerated as a skilled physician and judging from the inventories he was held in high regard in the Order in southern France and Spain. St Blaise was the patron of the Templars’ chapels at Hyères and Montfrin in Provence; and his relics are recorded in the inventories of the Templars’ houses in Avignon and Grasse, also in Provence, which both had altars dedicated to him, and at Peñíscola in Catalonia.

His cult may have spread as far as Paris, where one of the altars in the main Templar church was dedicated to him; the Templar sergeant Peter Maurini for one confessed during the trial that the Order possessed what he believed to be either the head of Saint Peter or Saint Blaise."