Relics of the Knights Templar en route - provenance and destination 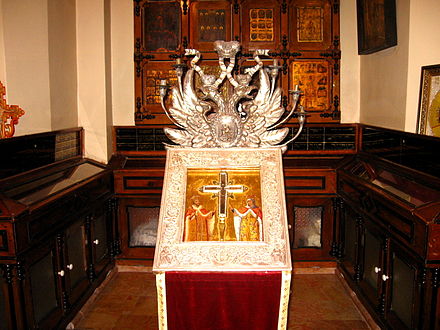 "The relics of the early fourth-century martyr Saint Euphemia were allegedly taken by the Templars from Constantinople after the city was sacked in 1204 during the Fourth Crusade, first to Atlit Castle (Château Pèlerin) in the Holy Land, then to Cyprus in 1291, and finally, with the Hospitallers, to Rhodes and Malta, before ending their days with Napoleon’s fleet at the Battle of the Nile in 1798.

It should be no surprise then that the military orders could amass substantial relic collections and so create highly visible cults. (...) In 1308 the Templar preceptory of Saint Eulalia (Aveyron, France) possessed no fewer than nine reliquaries containing a “wealth of relics,” (...)
Later medieval relics were not always associated with saints. Those with the greatest spiritual value were linked with the Passion of Christ. (... The) most significant Passion relic (...) distinction has held by the True Cross, which was a symbol of both victory and salvation and the symbolic ensign of the crusader army. The Templars do not seem to have carried the principal fragment of the True Cross venerated in Latin Jerusalem into battle themselves. That rare privilege usually fell to the patriarch of Jerusalem. But from the moment of its rediscovery in 1099 to its loss at the battle of Hattin in 1187 they guarded the Cross whenever it traveled outside the city.

However, many smaller fragments of the True Cross did make their way to Templar preceptories in Western Europe, particularly during the twelfth century. (...) The popularity of the cult of the True Cross in the Templar churches across Europe reflects not only its association with the Holy Land but also the order’s particular devotion as the militia of Christ. (...)"

Text focussing on the Templars selected from Gerrard, C.M. and Borowski, T. (2017) 'Constructing identity in the Middle Ages : relics, religiosity and theMilitary Orders.', Speculum., 92 (4). pp. 1056-1100. Illustration: Reliquary of the True Cross at the Church of the Holy Sepulchre, Jerusalem. Source Wikiwand