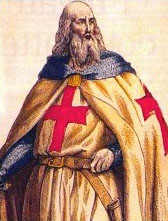 On March 18, 2020 we commemorate the 706th anniversary of the death of the last official Grand Master of the Knights Templar, Jacques de Molay.

As European support for the Crusades had dwindled, other forces were at work which sought to disband the Order and claim the wealth of the Templars as their own. King Philip IV of France, deeply in debt to the Templars, had De Molay and many other French Templars arrested in 1307 and tortured into making false confessions. When de Molay later retracted his confession, Philip had him executed by burning upon a scaffold on the Paris Ile des Juifs in the River Seine on 18 March 1314. Today a plaque commemorates the event.