Templars and a new (or old?) Priory of Sion

TemplarsNow™ normally does not venture in the realm of pseudo-history. But recently, during one of our regular scans of the internet on Knights Templar related news, we hit a well groomed page on the "Templar Knights". Now that is our piece of cake, so we clicked on.

This page shows standard and generally acknowledged information on the Order's origin and demise. However, it is one of very many pages of an extensive and copyrighted website calling itself "the official website of the Priory of Sion - Ordre de la Rose-Croix Véritas O.D.L.R.C.V.", of Italian pedigree. An order that rings some bells.

Email ThisBlogThis!Share to TwitterShare to FacebookShare to Pinterest
Libellés : priory of sion

Reliable Books on the Knights Templar

Books on the Knights Templar are quite common. Reliable books, without sensation and fantastic myths, and based on sound historical research are much less common. TemplarsNow™ is collecting those titles that merit the qualification "Reliable". Simply because they are based on profound scientific research.

This library will be ever expanding when reliable books are added. Sound scientific sources are most relevant for being selected, as are our own preferences based on experience.

Email ThisBlogThis!Share to TwitterShare to FacebookShare to Pinterest
Libellés : books

Templars and the Black Madonnas

From 1100 A.D. to 1300 A.D., hundreds of Gothic Cathedrals were constructed all over Europe. These great Gothic cathedrals, such as the ones at Chartres, Paris, Salisbury, St.Denis, and Cluny were dedicated to Notre Dame, Our Lady. Our Lady is usually thought to be the Blessed Virgin Mary, but by some Mary Magdalene.

Most cathedrals were also home to Black Madonnas, of which about 400 to 500 are present in Europe, depending on how they are classified. There are at least 180 Vierges Noires in France, and there are hundreds of non-medieval copies as well.

Bernard of Clairvaux and architectural aesthetics

This video is a reflection on the importance of architectural aesthetics in the work of the great political and religious Cistercian reformer Bernard of Clairvaux. Starting point is his the criticism of the Cluniac Romanesque art in his Apology to William de Saint-Thierry. In this letter to his friend, Bernard exposes the danger that the representation of non-real subjects (monsters and other fantastic creatures) can represent in diverting the monks from the rational search for the divine.

Email ThisBlogThis!Share to TwitterShare to FacebookShare to Pinterest
Libellés : Apology, Bernard of Clairveaux 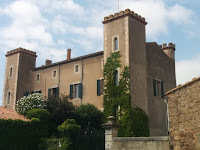 This study presents information on the investment by the Militia of the Order of the Temple, towards the middle of the Xlle century, in an agro-industrial sector milling and cloth fabrication.

The decline of slavery in the medieval world led men to re-discover and spread a very ancient invention: the water mill. It is believed that the first water mills were known, in the countries of the East, in Greece and in the Roman Empire from the 1st century BC to the 9th century. The mills spread quickly in France.

Godfrey of Boullion: founder of the proto-Knights Templar?

Several dates on the formation of the Knights Templar have been mentioned. These usually lie between 1118 and 1120, the latter coinciding with the Council of Nablus. But some dates are significantly earlier and are related to one of the leaders of the First Crusade, Godfrey of Boullion.

After conquering Jerusalem on June 15, 1099, Godfrey refused to become King of Jerusalem, instead choosing the title of Protector of the Holy Sepulcher. Some sources suggest that Godfrey was at least helpful to the foundation of the Order of the Temple or a precursor of that Order. It seems probable that Godfrey established an early Order in the Holy Land: the Order of the Holy Sepulcher.
Read more »
2 comments:

The Templar fleet: mistery and fact 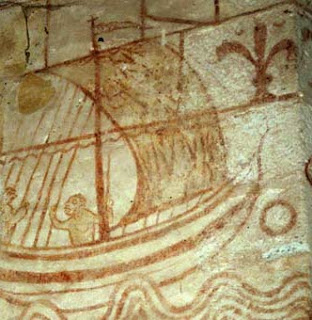 In many a conspiracy Templar tale the Templar fleet plays an important role in saving the "Templar Treasure" at the time of the demise of the Templar Order. But how important was this fleet, and did it play a major role in history?

The importance of the maritime activity of the Templars as well as the Hospitallers is difficult to define, even though it emerges progressively from reliable documents from the 1150s onwards.

The Hospitallers used boats which they rent from the Italian maritime republics. But, from 1160 on, it seems certain that they had their own ships, to transport either pilgrims to the Holy Land (treaty of 1166 between Narbonne and Genoa), or cardinals from Rome to Messina. In 1197 Queen Constance of Sicily granted the Order of the Hospital exemption of any tax for the transport of pilgrims and crusaders.

The Templars had a fleet at least from the beginning of the 13th century. They used it for the transport of troops and mechandise during the 5th Crusade (1217-1221). When, in 1233, the five viscounts of Marseille granted to the Temple and the Hospital the right to load two ships per year for the Orient, it seems that such a privilege existed already before 1213, as proven by the confirmations made Pope Honorius III and Frederic II in 1216.

During the 7th Crusade (1248-1254), brothers of both Orders served as intermediaries between the envoys of King Louis IX (1215-1270) preparing the royal expedition, and Genoese shipowners. The Temple dealt with Alphonse de Poitiers for the transport of the contingent of the Count for the 8th Crusade (1270). Both Orders obtained from Charles 1st of Anjou export licenses for food to the Orient on its own boats: 77 licences in 20 years for the Temple, but only seventeen for the Hospital.

Despite everything, at the end of the 13th and the beginning of the 14th Century, the fleets of the military orders remained modest. The Hospital had only naves, and no galleys before 1291. They did not participate in the evacuation of Acre (May 18. 1291). In 1306, the Hospital was forced to call on the Genoese corsair Vignolo de Vignoli, but the two galleys which he then held were insufficient for ensuring the brothers' journey to Rhodes and the conquest of that island.

The Temple, which had organized transports from southern Italy to Cyprus and had assisted in the evacuation of survivors of Acre, does not seem to have had more than about 10 ships. In 1312 these were attributed to the Hospital when the order was dissolved. Therefore a major role for a substantial, self owned "Templar fleet" at the time of the Order's collapse is improbable at most. 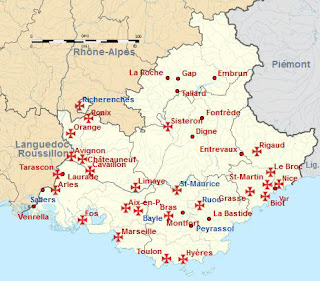