The Knights Templar - Canons at first? 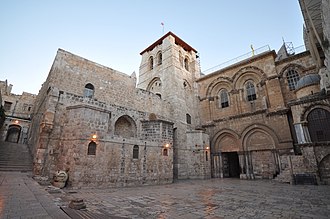 In his book The New Knighthood: A History of the Order of the Temple Malcom Barber reconstructs in detail the birth of the Order.

He argues that it is probable that, prior to their recognition by King Baldwin II sometime after Spring 1118, the brotherhood that later became the Knights Templar existed in another form. Prior to settlement on the former royal palace at the Temple Mount and becoming "The Poor Fellow-Soldiers of Christ and of the Temple of Solomon" (in Latin: Pauperes commilitones Christi Templique Salomonici), this brotherhood probably already existed for some years as one of the brotherhoods of the Holy Sepulcher.

Researching on this TN found that one of the possible groups was the Canons Regular of the Holy Sepulchre. Originally, a canon was a cleric living with others in a clergy house or, later, in one of the houses within the precinct of or close to a cathedral and conducting his life according to the orders or rules of the church. This way of life grew common (and is first documented) in the eighth century. In the eleventh century, some churches required clergy thus living together to adopt the rule first proposed by Saint Augustine that they renounce private wealth. Those who embraced this change were known as Augustinians or Canons Regular, whilst those who did not were known as secular canons.

According to the website of the Latin Patriarchate of Jerusalem Godfrey de Bouillon, who ruled Jerusalem between July 15, 1099 and his death on July 18, 1100, founded the Order of Canons of the Holy Sepulchre. According to accounts of the Crusades, in 1103 the first King of Jerusalem, Baldwin I, assumed the leadership of this canonical order.

The Order’s members included not only the Regular Canons (Fratres) but also the Secular Canons (Confratres) and the Sergentes. The latter were armed knights chosen from the crusader troops for their qualities of valour and dedication. They vowed to obey Augustinian Rule of poverty and obedience and undertook specifically, under the command of the King of Jerusalem, to defend the Holy Sepulchre and the Holy Places. This description seems a blueprint for the later Knights Templar Order.

sources Wikipedia 1 and 2, and LPJ. illustration Church of the Holy Sepulchre Wikipedia