The Primitive Templar Rule, written in 1128 and added to the minutes of the Council of Troyes in 1129, holds only 72 articles. Here the beard is only mentioned in article 21.

Article 21: On Bed Linen:
(...) And the Draper (the Brother taking care of the bed linen, TN) should ensure that the brothers are so well tonsured that they may be examined from the front and from behind; and we command you to firmly adhere to this same conduct with respect to beards and moustaches, so that no excess may be noted on their bodies.

In about 1138, under the direction of Robert de Craon, second grand master of the order (1136–1149), the rule was translated into French and modified. In this French Primitive Rule the beard is mentioned in three articles

Article 31 is On Bed Linen and replaces the old article 21. The new version says in translation (TN): "(...) we firmly order that they have a beard and a mustache without any superfluity of vice being noted in their dress." 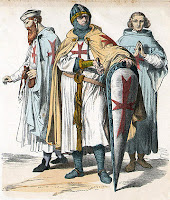 Article 195, one of seven articles pertaining to the nursing brother ("frère infirmier") says: "(...) the nurse can give them leave of the bleeding and shearing their heads. But to shave off their beards (...) he must take the leave of the master or the one who is in his place."

The combined articles may suggests that for full brothers, except the chaplains, it was exceptional not to have a "shaven head" (sometimes interpreted as "bold) and a neatly trimmed beard and mostache.