"Crusaders in the East were for the time militia (to the Byzantine Emperor, TN) who were there to serve a purpose. The question of restituting the churches of the East to Rome was not in the crusader’s plans. This position changed drastically when (Emperor TN) Alexius abandoned the Crusaders in view of the impending Muslim backlash.
When Antioch was captured, Crusaders sent notice for Alexius to come to the Levant and take official control of the city. Alexius’ forces, however, turned back on their march to Antioch. During this time the unfortunate death of Adhémar in the summer of 1098 created an important political and religious void for the Crusaders. Urban had sent Adhémar with the Crusaders to insure the stipulations agreed upon by the two Churches were maintained. When Crusaders learned that Alexius’ forces had turned back, the previous religious and political plans were discarded as void.

Crusaders interpreted Alexius’ actions as the submission of Antioch to the Latins,  and immediately sent a petition to Pope Urban. (...) The letter sent by the Crusaders demonstrates how they understood their own actions in the Levant. Their obedience to Adhémar and the restitution of territories back to the Byzantines was done to honor the Pope’s wishes. Without the papal legate and the Byzantine’s betrayal, the work Crusaders were doing took on an entirely new meaning. The views expressed through the Crusaders words and actions placed Rome at the head of the pentarchy of Churches. From their position and for their immediate concerns Rome was to be the administrator of the biblical lands they were conquering. This sudden turn of events forced Crusaders to voice their views towards the Pope and the role he should play among Christians. The need for the Latin’s own clerics also signaled their will to institute a Western religious orthodoxy over the Eastern ‘heretic’ Christians. The crusading campaign was suddenly transformed into a campaign of conquest for Rome and the West."

This blog quotes adapted sections of the dissertation THE LITURGY OF THE HOLY SEPULCHRE AND THE TEMPLAR RITE: EDITION AND ANALYSIS OF THE JERUSALEM ORDINAL by Sebastián Ernesto Salvadó, August 2011, Stanford University. Illustration: Portrait of Emperor Alexios I (1048-1118), from a Greek manuscript; source Wikipedia.
Support TemplarsNow™ by becoming a Patron, tipping us or buying one of our Reliable Books
No comments:

The Templar Chapter of 1147

Every five years, the Chapter of the Templar Order convened, bringing together the high dignitaries of the order. They debated political questions and decided acts which engaged the order as a whole. It was also the internal court of appeal that dealt with serious disciplinary questions.

On April 27, 1147, eight days after Easter, a general chapter of the Order of the Temple in France was gathered in the Commandery of the Temple of Paris. Before Pope Eugene III, the King of France Louis VII, and many prelates, the Knights Templar and their master Evrard des Barrès engaged for the first time for the second Crusade. At this meeting Pope Eugene III granted the Templars the right to wear a red cross on their white coat.
In his "THE HISTORY OF The Knights Templars, THE TEMPLE CHURCH, AND THE TEMPLE", (1842) Charles G. Anderson describes the Chapter as follows:
"The Lord Robert, Master of the Temple, was at this period (A. D. 1146) succeeded by Everard des Barres, Prior of France, who convened a general chapter of the order at Paris, which was attended by Pope Eugenius the Third, Louis the Seventh, king of France, and many prelates, princes, and nobles, from all parts of Christendom. The second crusade was there arranged, and the Templars, with the sanction of the Pope, assumed the blood-red cross, the symbol of martyrdom, as the distinguishing badge of the order, which was appointed to be worn on their habits and mantles on the left side of the breast over the heart, whence they came afterwards to be known by the name of the Red Friars and the Red Cross Knights.[32]
At this famous assembly various donations were made to the Templars, to enable them to provide more effectually for the defence of the Holy Land. Bernard Baliol, through love of God and for the good of his soul, granted them his estate of Wedelee, in Hertfordshire, which afterwards formed part of the preceptory of Temple Dynnesley. This grant is expressed to be made at the chapter held at Easter, in Paris, in the presence of the Pope, the king of France, several archbishops, and one hundred and thirty Knights Templars clad in white mantles.[33] Shortly before this, the Dukes of Brittany and Lorraine, and the Counts of Brabant and Fourcalquier, had given to the order various lands and estates; and the possessions and power of the fraternity continued rapidly to increase in every part of Europe."

The painting is kept at the Versaille Palace, France. Photo (C) RMN-Grand Palais (Château de Versailles) / Gérard Blot. Published with permission under the rules of T&C of rmngp.fr, Text inspired by Wikipedia.
Support TemplarsNow™ by becoming a Patron, tipping us or buying one of our Reliable Books
No comments:

What triggered the Crusades? - the Church's point of view 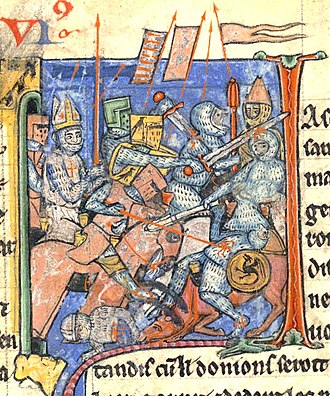 A major question keeps hovering above history: what triggered the Crusades? Today the Church's point of view.
Read more »
No comments:

In his famous book The New Knighthood: A History of the Order of the Temple Malcom Barber reconstructs in detail the birth of the Order. He argues that it is probable that, prior to their recognition by King Baldwin II sometime after Spring 1118, the brotherhood that later became the Knights Templar existed in another form. Prior to settlement on the former royal palace at the Temple Mount and becoming "The Poor Fellow-Soldiers of Christ and of the Temple of Solomon" (in Latin: Pauperes commilitones Christi Templique Salomonici), this brotherhood probably already existed for some years as one of the brotherhoods of the Holy Sepulcher.

Templars and wine making in Occitania

When in the 12th to 14th centuries Knights Templar returned from their Crusade, they settled also on the territory of Banyuls and Collioure,  (departement Pyrénées-Orientales, region of  Occitanie, Southwest France), and restored the noble grape varieties planted there by the Phoenicians centuries earlier.

Map of medieval monasteries in the Netherlands published 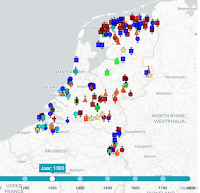 On October 17, 2019 the Vrije Universiteit at Amsterdam, the Netherlands, published The Map of Monasteries. This map shows the monasteries of all orders which have been represented in the present-day Netherlands during the Middle Ages and Early Modern period (until 1800).
Read more »
No comments: