For the purpose of TemplarsNow the medieval geo-political landscape of what is now France is important. The County of Champagne, especially the area around Troyes, was the native region of many an early knight Templar. This geo-political situation was fragmented to say the least, as the adjacent maps show.

In 987, Hugues Capet was elected king. The monarchy becomes hereditary, and the Capetians reign over France for more than 800 years. Nevertheless, the first Capetian kings only directly control a very small portion of the French territory, called the royal domain, and some of their vassals are much more powerful than them. In the twelfth century, royal power began to assert itself against the princes of the kingdom, but faced from the 1150s to the birth of a "Plantagenet empire" grouping together in England and the western third of France.

The Capetian kingdom reached its peak in the 13th century, with the monarchy regaining the power it had lost while French art and culture asserted in Europe.

Philip Augustus (1180-1223) managed to conquer most of the French possessions of the Plantagenets, temporarily putting an end to the English threat and considerably enlarging the royal domain at the same time.

Louis IX (1226-1270) behaves as a referee of Christendom and participates in the seventh and eighth crusades, which will lead him to be canonized very quickly by the Catholic Church

Templars in Switserland - then and now

As we have argued in an earlier post, certain historians and conspiracists alike suggest that the Knights Templar did in fact form Switzerland.  The evidence and likelihood seem pretty plausible. At the same time hard evidence is scarce and circumstantial at best. Historical fact is that the Order of the Temple counted on the current Swiss territory only two commanderies: La Chaux and Geneva.

La Chaux in Cossonay is attested in 1223 and Geneva (district of Rive) is quoted in 1277. These had other dependent houses, particularly in Cologny, Bénex (commune of Prangins) and Entremont (commune of Yvonand). All these establishments belonged to the baillie (or preceptory) of Burgundy, subdivision of the Templar province of France.

La Chaux Commanderie was given by the lords of Cossonay to the Knights Templar before 1223. This commandery does not seem to have been particularly profitable, because in 1277 part of the possessions was sold to the Franciscan order to pay debts. After the dissolution of the Order, it passed in 1315 to the Knights of the Order of St. John of Jerusalem. The commandery depended the hospices of Orbe, Villars-Sainte-Croix and Montbrelloz.

After the Protestant Reformation in the 16th Century, the commandery was secularized, subordinated to the last commander, then in 1539 to the brothers of the reformer Guillaume Farel, finally sold in 1540 to Robert du Gard.

In Geneva there is a Ruelle de Templiers. This name comes from a house and a chapel of the Knights Templar who were there. At the suppression of this order, in 1312, they passed, as everywhere, to the Hospitallers of Saint John. This establishment was destroyed in 1534 with the suburbs of the left bank.

Modern Swiss Knights Templar (probably part of the OSMTH.net branch, though this Order is not referred to directly on the website) are organized in the Commandery Bertrand de Blanquefort, situated in the hart of Geneva, and the Commandery André de Montbard at Kanton Vaud (no town mentioned).

Illustrations show La Chaux Commanderry and the location of the two historic commanderies in Switserland. Source of the illustrations and part of the text (translated and adapted) from Wikipedia and sources mentioned therein. 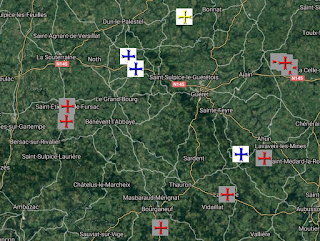 The French maps will be constructed by combining the information of both websites mentioned above and plotting it on modern Google-satellite maps, one per Department. In the process, the geographical location of each site is checked on the Cassini-map and other sources on the internet. Primary source is the templiers.net website. Additional information is used from the templiers.org website and from other sources on the internet. The site description on the maps uses snippits of text (for now in French) and photographs, mainly from the templiers.net website. If other information is presented, the sources are indicated. The illustration above presents a part of the resulting map for the Creuse Department (23). All completed maps will be summed up on the page on France.


Obviously these new TemplarNow maps could not be made without the information provided by the websites http://templiers.net and http://templiers.org and additional sources. Therefore these maps should be seen as the elaborated and augmented representation of the great work of others.
No comments:

The Siege of Jerusalem took place from June 7 to July 15, 1099, during the First Crusade. This successful siege saw the Crusaders take Jerusalem from the Fatimid Caliphate and laid the foundations for the Kingdom of Jerusalem.

Only one year earlier, in the summer of 1098, the (Muslim) Fatimid Emir (commander) al-Afdal Shahinshah had taken Jerusalem from the (also Muslim) Seljuk Turks after a 40-day siege, on orders of the Fatimid Vizier (Minister of State) al-Musta’li, ruler of Egypt. Many months of political and diplomatic maneuvering with the Franj (Franks–the Arabic term used for all Western European Crusaders) and the Rumi (Romans–actually the Greeks of the Byzantine Empire) had not gotten the vizier the concessions he wanted, so he simply had sent Emir al-Afdal to seize the city the Crusaders were coming to capture, thereby presenting the Franj invaders with a fait accompli.

These 1098 events indicate that the negotiations between the Byzantine and Franj on the one hand, and the Muslim Fatimid rulers of Egypts on the other hand on combined efforts against their common enemy, the Muslim Seljuk Turcs that controlled the eastern part of the Byzantine Empire as well as Jerusalem, had turned sour.

These negotiations may have been one of the reasons why the Crusader army, after the successful siege of Antioch in June 1098, remained in that area for the rest of the year. Other reasons being disagreement between the leaders of the army on what to do next. Bohemond of Taranto had claimed Antioch for himself and wanted to remain there. Baldwin of Boulogne remained in Edessa, captured earlier in 1098. By the end of the year 1098, the minor knights and infantry were threatening to march to Jerusalem without their leaders. Eventually, on January 13, 1099 Raymond of Toulouse began the march south, down the coast of the Mediterranean, followed by Robert of Normandy and Bohemond's nephew Tancred, who agreed to become his vassals.

The 1099 siege and conquest of Jerusalem is notable for the mass slaughter of Muslim and Jewish perpetrated by the Christian crusaders, which contemporaneous sources suggest was savage and widespread. Atrocities committed against the inhabitants of cities taken by storm after a siege were normal in ancient and medieval warfare by both Christians and Muslims. The Crusaders had already done so at Antioch, and Fatimids had done so themselves at Taormina, at Rometta, and at Tyre. However, the massacre of the inhabitants of Jerusalem may have exceeded even these standards. Historian Michael Hull has suggested this was a matter of deliberate policy rather than simple bloodlust, to remove the "contamination of pagan superstition" (quoting Fulcher of Chartres) and to reform Jerusalem as a strictly Christian city.

Sources text historynet.com and Wikipedia. Illustration a 13th-century miniature depicting the siege, Wikipedia
Support TemplarsNow™ by becoming a Patron, tipping us or buying one of our Reliable Books
No comments:

Reliable books on the Crusades 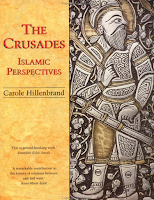 TemplarsNow is always looking to identify, promote and (re)distribute sources of reliable information on the Knights Templar and their time. Therefore this blog quotes the valuable list of "the 15 most important Books on the Crusades" prepared in 2017 by Andrew Holt PhD.