The fall of Muslim Jerusalem to the Muslims 1098 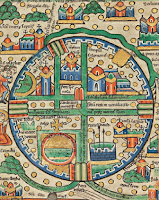 In the Crusader story, a strange event just prior to the conquest of Jerusalem by the Crusader army in July 1099, seems to be scarcely mentioned. This is the taking of Jerusalem from its Muslim Seljuk Turkish ruler (since 1073) by the Muslim Fatimid rules of Egypt.

The summer of 1098 saw the much-fought-over fortress city in Egyptian hands. The Fatimid Emir (commander) al-Afdal Shahinshah had taken Jerusalem from the Seljuk Turks after a 40-day siege, on orders of Vizier (minister of state) al-Musta’li, ruler of Egypt.


Many months of political and diplomatic maneuvering with the Franj (Franks–the Arabic term used for all Western European Crusaders) and the Rumi (Romans–actually the Greeks of the Byzantine Empire) had not gotten the vizier the concessions he wanted, so he simply had sent Emir al-Afdal to seize the city the Crusaders were coming to capture, thereby presenting the Franj invaders with a fait accompli.

This Fatimid conquest was the final step of developments during two decades within the fragmented Muslim world, where rulers of the same faith fought one another. Religion apparently being of no importance in matters of worldly power and conquest. This development is summarized as follows:

These 1098 events suggest that there were negotiations between the Byzantine (and perhaps even the Crusading Frankish) powers on the one hand, and the Muslim Fatimid rulers of Egypts on the other hand on combined efforts against their common enemy: the Muslim Seljuk Turcs that controlled the eastern part of the Byzantine Empire as well as Jerusalem. Negotiations that apparently turned sour, resulting in lots of misery. It now took untill 1192 when the Third Crusade under Richard the Lionheart failed to recapture Jerusalem, but reached the Treaty of Ramla with Saladin. In this treaty Saladin agreed that Western Christian pilgrims could worship freely in Jerusalem.