The subsurface of Temple Mount, Jerusalem

Approximately one in four pottery fragments recovered by the TMSP date to the Early Islamic Period (638-1099), mostly consisting of Ummayad tableware and storage vessels, and Abbasid tableware, storage and cooking vessels. Other finds include many architectural elements connected to the construction of the Dome of the Rock and the Al-Aqsa Mosque, the most prominent being thousands of colored and gilded mosaic tesserae belonging to wall mosaics, most likely the mosaics akin to those adorning the inner walls of the dome of the rock, which adorned the outer walls till their replacement by glazed tiles in the 16th century.

During the Crusader period (1099-1187) the sub-floor structure of the Temple Mount was used as a Opus Sectile tiles from this era match up exactly to patterns seen under the Dome of the Rock's carpeting, as well as the churches of the Holy Sepulchre and of St. John the Baptist.
stables by the Knights Templar, which gave Solomon's Stables its current name. This use is reflected in finds such as hundreds of armor scales, horseshoe nails, and arrowheads. Over a hundred silver Crusader coins make up the biggest and most varied collection of such coins from Jerusalem.

Below some additional sources on the subsurface of Temple Mount.

The fall of Muslim Jerusalem to the Muslims 1098 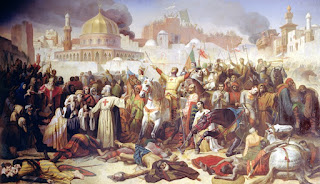 In the Crusader story, a strange event just prior to the conquest of Jerusalem by the Crusader army in July 1099, seems to be scarcely mentioned. This is the taking of Jerusalem from its Muslim Seljuk Turkish ruler (since 1073) by the Muslim Fatimid rules of Egypt.

The summer of 1098 saw the much-fought-over fortress city in Egyptian hands. The Fatimid Emir (commander) al-Afdal Shahinshah had taken Jerusalem from the Seljuk Turks after a 40-day siege, on orders of Vizier (minister of state) al-Musta’li, ruler of Egypt.

Many months of political and diplomatic maneuvering with the Franj (Franks–the Arabic term used for all Western European Crusaders) and the Rumi (Romans–actually the Greeks of the Byzantine Empire) had not gotten the vizier the concessions he wanted, so he simply had sent Emir al-Afdal to seize the city the Crusaders were coming to capture, thereby presenting the Franj invaders with a fait accompli.

This Fatimid conquest was the final step of developments during two decades within the fragmented Muslim world, where rulers of the same faith fought one another. Religion apparently being of no importance in matters of worldly power and conquest. This development is summarized as follows:

These 1098 events suggest that there were negotiations between the Byzantine (and perhaps even the Crusading Frankish) powers on the one hand, and the Muslim Fatimid rulers of Egypts on the other hand on combined efforts against their common enemy: the Muslim Seljuk Turcs that controlled the eastern part of the Byzantine Empire as well as Jerusalem. Negotiations that apparently turned sour, resulting in lots of misery. It now took untill 1192 when the Third Crusade under Richard the Lionheart failed to recapture Jerusalem, but reached the Treaty of Ramla with Saladin. In this treaty Saladin agreed that Western Christian pilgrims could worship freely in Jerusalem.

The agricultural revolution described in an earlier blog resulted in a change in the land use that allowed the subsistence farmer to go with his surplus crop to the market, originally at the local church, to buy and sell. The creation of markets at the churches gave way to more defined market places that specialized in certain products. Trade chains developed. For instance, sheep were a good investment, for their wool was appreciated especially in the colder northern climates. Sheep’s wool was sheared by the shepherd, which wool was sold in the fairs and markets of Champagne (France) and later Flanders (Belgium) for processing and weaving. The product was bought by Italians from Northern Italy for further refinement, and from there sold in international trade.

The tradesmen, artisans, and workers did organize. The first labor laws protecting selected trades in "guilds" were enacted in Ghent in the 11th Century. Normally groups of property owners, burgers, and representatives of the guilds and associations, shared power with the titular feudal authority except when they went their own way. These "Communes" controlled the means of production in their towns and the association with other towns. The wool producing towns in France, Belgium and Germany were either dominated by such communes or independent as “communal republics”.

Many Italian city states used the communal republic as a form of governance. As such, Florence, Genoa and Venice were republic in form. These Italian cities provided the banking, trading and maritime skills for the wool producing regions in Champaign (France), Flanders (Belgium) and England.

This text consists of slightly edited quotes from the blog The Cistercian Connection by Gordon S Fowkes. The illustration is from the same source.
No comments:

"Genetic Admixture from the Crusaders in the Near East"

"During the medieval period, hundreds of thousands of Europeans migrated to the Near East to take part in the Crusades, and many of them settled in the newly established Christian states along the Eastern Mediterranean coast.

Here, we present a genetic snapshot of these events and their aftermath by sequencing the whole genomes of 13 individuals who lived in what is today known as Lebanon between the 3rd and 13th centuries CE. These include nine individuals from the ‘‘Crusaders’ pit’’ in Sidon, a mass burial in South Lebanon identified from the archaeology as the grave of Crusaders killed during a battle in the 13th century CE.

We show that all of the Crusaders’ pit individuals were males; some were Western Europeans from diverse origins, some were locals (genetically indistinguishable from present-day Lebanese), and two individuals were a mixture of European and Near Eastern ancestries, providing direct evidence that the Crusaders admixed with the local population.

However, these mixtures appear to have had limited genetic consequences since signals of admixture with Europeans are not significant in any Lebanese group today—in particular, Lebanese Christians are today genetically similar to local people who lived during the Roman period which preceded the Crusades by more than four centuries."


This blog quotes the summary of the paper A Transient Pulse of Genetic Admixture from the Crusaders in the Near East Identified from Ancient Genome Sequences by Marc Haber et al., published in The American Journal of Human Genetics104, 977–984, May 2, 2019 published on internet here. This is an open access article under the CC BY license (http://creativecommons.org/licenses/by/4.0/). Illustration shows bones in the Sidon Crusaders' pit, source www.sanger.ac.uk.
No comments: