Prologue of the Crusades: Jerusalem and the Seljuks "When the Muslim Seljuks, a Turkish steppe tribe, spectacularly defeated an army of the Byzantine Empire at the Battle of Manzikert in ancient Armenia in August 1071 CE, a series of events followed which would lead to centuries of East-West warfare couched in religious terms: the Crusades.

The Seljuks created the Sultanate of Rum and conquered Byzantine Edessa and Antioch in 1078 CE. Next, they captured Jerusalem from their rival Muslims, the Fatimids of Egypt, in 1087 CE (the city had been in Muslim hands since the 7th century CE).

Alexios I Komnenos, the Byzantine emperor (r. 1081-1118 CE) realised that Seljuk expansion into the Holy Land was a perfect opportunity to gain the help of western armies in his battle to control Asia Minor and so he sent a direct appeal to Pope Urban II in March 1095 CE. Both the Pope and western knights would respond in a far greater capacity than Alexios could ever have imagined.

Urban II was disposed to give military assistance to the Byzantines for various reasons. A crusade to bring the Holy Land back under Christian control was an end in itself - what better way to protect such important sites as the tomb of Jesus Christ, the Holy Sepulchre in Jerusalem. Christians living there or visiting on pilgrimage also required protection.

In addition, there were very useful additional benefits. A crusade would increase the prestige of the Papacy, as it led a combined western army, and consolidate its position in Italy itself, having experienced serious threats from the Holy Roman Emperors in the previous century which had even forced the popes to relocate away from Rome. Urban II also hoped to make himself head of a united Western (Catholic) and Eastern (Orthodox) Christian church, above the Patriarch of Constantinople. The two churches had been split since 1054 CE over disagreements about doctrine and liturgical practices."

Quotes and illustration from Cartwright, M. (2018, October 22). Council of Clermont. Ancient History Encyclopedia. Retrieved from https://www.ancient.eu/Council_of_Clermont/. This quote is licensed under equal terms as the original publication, being Creative Commons: Attribution-NonCommercial-ShareAlike. 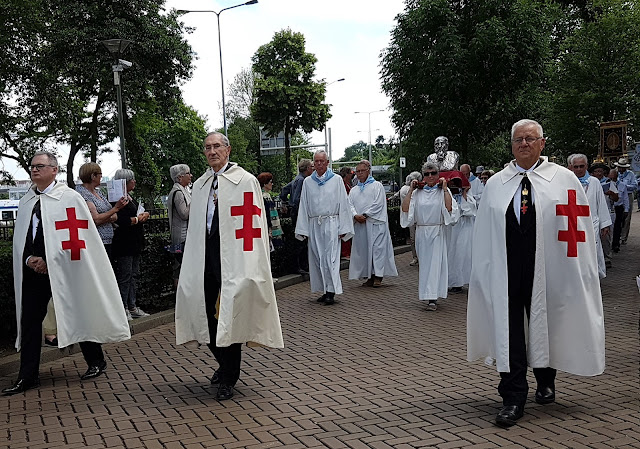 "Participants in a historic religious procession during the 2018 Heiligdomsvaart (Relics Pilgrimage) in Maastricht, Netherlands.
The history of this seven-yearly catholic pilgrimage goes back to the Middle Ages. The first 'modern' version took place in 1874. On both Sundays of the 10-day festival, a procession is held in which the main relics and other devotional objects are exhibited.
This photo was taken at Het Bat during the (second) procession on Sunday 3 June 2018. This particular group consists of members of the interdenominational OSMTH Order of the Knights Templar. They are followed by a group representing the nearby parish of Houthem-Sint Gerlach, where Saint Gerlachus is venerated."

The Knights Templar: orthodox of heretics? 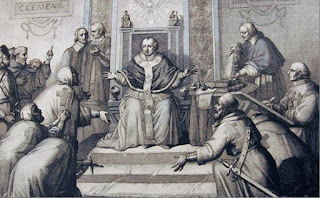 "Sophia Menache pointed out in her article ‘Contemporary attitudes concerning the Templars’ affair’ (1982) that  local chroniclers in England ‘supported the French version of the Templars’ heresy’, although King Edward II and his prelates did not. This raises the question of whether local chroniclers were aware of irregularities in the Templars’ religious beliefs that were not known to the higher authorities.

Drawing on unpublished and published inventories and estate records from the National Archives of the UK, this chapter argues that, far from revealing irregularities, these records show that the Templars’ beliefs were entirely orthodox. However, although the chapels of their major houses were sumptuously equipped, those at smaller, more remote houses contained little equipment and must have relied on the services of hired priests. Such reliance on outside spiritual services meant that the Templars’ religious practices must have been closely linked to those of the society in which they operated."

This blog quotes the summary of the paper (2018) by Helen Nicholson (Cardiff University, UK) entitled "Evidence of the Templars' religious practice from the records of the Templars' estates in Britain and Ireland in 1308", published in Communicating the Middle Ages: Essays in Honour of Sophia Menache. Crusades Subsidia 11, ed. Irish Shagrir, Benjamin Z. Kedar and Michel Balard, 2018 and on academia.edu.  Illustration engraving by Tommaso de Vivo showing ClementV interrogating Knights Templar, source osmth.it