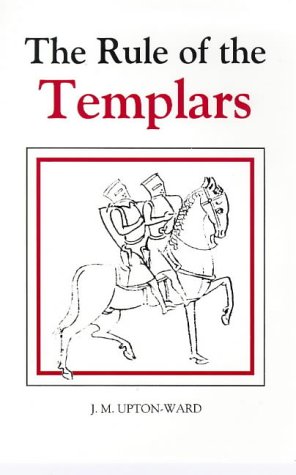 The Latin Rule, also known as the Primitive Rule, was the result of the discussions that took place at the Council of Troyes, which was under the heavy guidance of Bernard of Clairvaux, the new rising star of the Church. This Council took place in January 1129.

The original Latin Rule, from the Council of Troyes, was actually written by the council’s scribe, John Michael, though the credit for its contents goes to St Bernard; ‘At the very least he must have been a major influence on the framing of the Latin Rule, for it is clear that the later Templars valued their Cistercian links above all’.

The structure of the text is strikingly similar to that of ‘Carta Caritatis’ and the Rule of St Benedict, which implies a replication of Cistercian organisation and values. What is very interesting to note is that it was at the Council of Troyes that the Knights Templar came to follow the Rule of St Benedict; ‘At the time of the Council, the Templars had been following the Rule of St. Augustine, however, this changed in 1129 with the direct influence of the Cistercian abbot St. Bernard of Clairvaux.’

The Rule itself describes procedures that the Templar brothers should adhere to on a day-to-day basis. The description of procedures -in particular clause three, which relate to clothing- resonates the tone of both the Cistercian ‘Charter of Charity’ and also the Rule of St Benedict. In fact much of the Rule appears to have strong monastic overtones, rather than a military aspect and the detail that is given to food and drink is very similar to that of the Cistercians.

Buy your own Rule here.  For the original Latin Rule in French visit templiers.org.free.fr

This blog is in part based on the thesis by Lori Firth, Hull University (2012):  "A Comparison of the Cistercian and Knights Templar Orders, And the Personal Influence of Bernard of Clairvaux", to be found here

The Primitive Rule in English is quoted below in its entirety. Source: www.templiers.org

Support TemplarsNow™ by becoming a Patron, tipping us or buying one of our Reliable Books
Read more »
No comments:

Every year the city of Lier (Belgium) is celebrating its patron Saint St Gummarus by a procession. The Saint Gummarus procession takes place on the first Sunday after 10 October (Sint-Gummarus fair).

Sixteen members of the Society of the Bearers carry the silver reliquary of St. Gummarus, which weighs more than 800 kg, through the streets of Lier.

During the feast day of the Saint (11 October), pilgrims from everywhere world come to the Sint-Gummarus church to ask for healing of malfunctions and call in the Saint's help to stay free of fractures.

In pronouncing the blessing, the priest puts the belt of Saint Gummarus on the shoulders of the pilgrim, the ritual of laying the band. This refers to the story where Saint Gummarus healed a cut down tree by wrapping his belt around the trunk and bringing it back into bloom.

Reconstruction of a Templar Commandery in 3D

The Holy Sepulchre, cradle of the Knights Templar

"According to a chronicle on the Templars’ beginnings, attributed to Ernoul, (...) the first Templars were a group of knights who had dedicated themselves to the Holy Sepulchre after the First Crusade. They realized that the country needed warriors, and criticized themselves for living an idle and comfortable life when they should be working. So they decided, with the permission of the prior of the Sepulchre, to elect a Master who could lead them in battle as necessary.