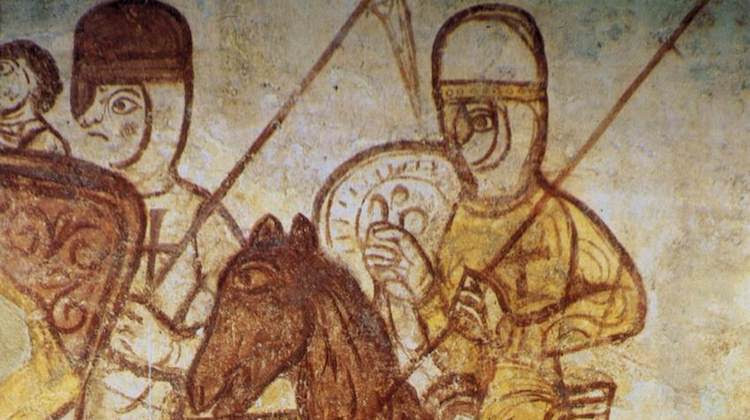 "It is revealing that in recovering this canon (on the prohibition of clergy bearing arms; TN) from earlier legislation, Gregory IX and Raymond of Peñafort went all the way back to the council of Poitiers in 1078, convened during the pontificate of Gregory VII (...) In sum, then, between 1049 and 1095, no fewer than thirteen councils and synods had damned clerical armsbearing. At nine of these thirteen assemblies, three different popes and six papal legates presided. The reforming papacy seemingly could not have been clearer on this issue." After that "there is almost nothing in the decrees of the seven so-called ecumenical or general councils held between 1123 and 1312". (...)
It was between Clermont in 1095 and Lateran IV in 1215 that the prohibition on armsbearing by the clergy had come to be effectively demolished by decisions made by prelates and popes. (...) What changed between 1095 and 1215 began in the Holy Land and ended in Rome. (...)

On the issue of clerical armsbearing, we can pinpoint the turning point. Two intertwined breakthroughs occurred in the crusader Kingdom of Jerusalem in 1120, and behind them both was the Patriarch of Jerusalem, Warmund or Gormund of Picquigny (1118-28). On January 16 of that year, King Baldwin II and the patriarch convened at Nablus a council of the great men of the realm, ecclesiastical and secular, (the same council at which the early Knights Templar probably recieved their royal commission; TN), to enact legislation touching a variety of issues in twenty-five chapters. Number 20 decreed that “Si clericus causa defenssionis [sic] arma detulerit, culpa non teneatur” (meaning: ‘If a cleric bears arms for the sake of defense, he is not to be held at fault’).(...)

What lay behind this unprecedented legislation? Very likely the vulnerability of the crusader states in the Holy Land exposed in 1119, the year before. Around Easter (6 April) a large group of about 700 pilgrims was attacked in the barren region between Jerusalem and the River Jordan; 300 were killed and 60 captured. And on 27 June, Prince Roger of Antioch and his army perished on the “Field of Blood” (ager sanguinis) in his vain effort to attack Aleppo. Antioch now stood defenseless. Its patriarch, Bernard, driven by necessity, ordered that clergy, monks, and laymen guard the walls of the city, and it was he, “nocte et die cum armato suo clero et militibus”, who protected the city until the arrival of King Baldwin of Jerusalem.

Was the legislation at Nablus six months later meant to justify ex post facto the earlier behavior of the patriarch of Antioch and his clergy? Perhaps, although the patriarch of Jerusalem had no jurisdiction over Antioch. It seems more likely that Warmund and the entire episcopate of the Kingdom (who were all present at Nablus) meant this provision to apply to their own clergy should similar dangers arise—and both the prologue to the canons of Nablus and a nearly contemporaneous letter Warmund sent to Archbishop Diego of Compostella reveal how frightened Warmund was of a Saracen world closing in on all sides."

Adapted from the paper "Armsbearing by the Clergy and the Fourth Lateran Council" by Lawrence G. Duggan; illustration  source