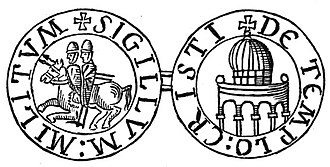 "The legislative body by which the friars of the Temple govern themselves underwent many logical adaptations to suit the times, along its existence. In spite of this, they channeled themselves in two different and complimentary but equally valid points: on the one side papal bulls and on the other the general chapters.

This blog quotes from the paper "The First Templar Knight - The Origin of the Temple" by Josè Maria Fernandez Nuñez in The Grail Magazine, September 2015. Illustration Templar seal, source Wikipedia