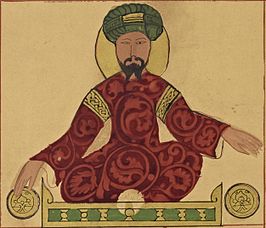 
Despite this there are also many images from the manuscripts examined in this study that depict Saracens and Christians similarly and acknowledge certain admirable Saracens. The depictions of Saladin and Ferragut as western figures, kings and Knights no less, establish a different kind of representation of Saracen than the biased views of other depictions. Although individuals like Saladin and Ferragut are rare, this demonstrates that the artists of these manuscripts understood that these figures could be received favorably by their audiences. ...

By depicting them with western characteristics these figures were elevated from the standard Saracen topos and honored by the extension of a kind of pseudo western status to them. This is hardly an example of tolerance, for the favorable depiction of them is entirely on standard Christian terms, but it still displays a kind of nuanced understanding of the figures that is important to note. It demonstrates that Christians from the time understood Saracens as more than the monsters that they so often depict them with in the other manuscripts examined in this study..."

This blog quotes from the conclusions of "Benjamin Anthony, "Monstrous Muslims? Depicting Muslims in French Illuminated Manuscripts from 1200-1420" (2015). Honors Theses and Capstones. 236 to be found here. Illustration Saladin source Wikipedia


Support TemplarsNow™ by becoming a Patron, tipping us or buying one of our Reliable Books.