Setting the stage for the Crusades - role of the Church

"The rude and unlettered barbarian tribes who had eclipsed the rule of the Roman Empire were led by the Roman Church. The Church provided the glue by which these scattered tribes became a united force capable of protecting the Continent against the military expansion of Islam and the Oriental hordes. Its priests, bishops, and monastic communities provided political as well as spiritual leadership among far-flung and isolated towns and villages. Ecclesiastical councils served as courts of justice. Christian monasteries preserved learning and literacy. Norman Cantor estimated that ninety percent of those who attained literacy between 600 and 1100 received their education in a monastic school. The Church extended the hand of charity to the poor and suffering.

On the other hand, the Church was responsible for inculcating pernicious doctrines that infested Europe for centuries. Original sin was no mere philosophical or religious speculation. The concept of sin informed the entire social, political. anti legal structure. Since the human condition was fallen to begin with, justice was, by deﬁnition, impossible. Social improvement was not a goal. This was a reversal of earlier ]ewish beliefs in the goodness of God and the possibility of reformation of society through adherence to the Divine. To the medieval Christian, life was a test and trial in preparation for death. lf one were good, the joys of Paradise followed the loss of the body. The soul-chilling horror of eternal torment in Hell awaited the wicked. Suffering cleansed and puriﬁed the soul in preparation for its after-death reward. Contrition. confession and penence were introduced in the sixth century by Pope Gregory I, "the Great"(later nanonized), as the sole means by which the sin-befouled human being could advance through the intermediate state of Purgatory.

Nature herself was evil. She was the source of the insistent, instinctual sexual drive to reproduce. Those conceived by the sin of sex were sinful at birth. Celibacy hecame a spiritual ideal rather than a spiritual technique. The atternpt to promulgate and enforce rigid antisexual hehavior on the masses led to a raging rebellion within the European psyche. lnsanity and disease are the inevitable consequences of sexual repression, and they took a horrid toll durig the Middle Ages. Because sickness of the body was seen as God's punishment for wickedness, the medical arts were conﬁned to Arab and ]ewish practitioners and to women, who studied herbs and the healing properties of nature. These were among the many who fell in that great battle against Satan and the flesh known as the lnquisition - the central command center for the centuries of murder, torture, and hysteria that followed its establishment."

Setting the stage for the Crusades - daily life 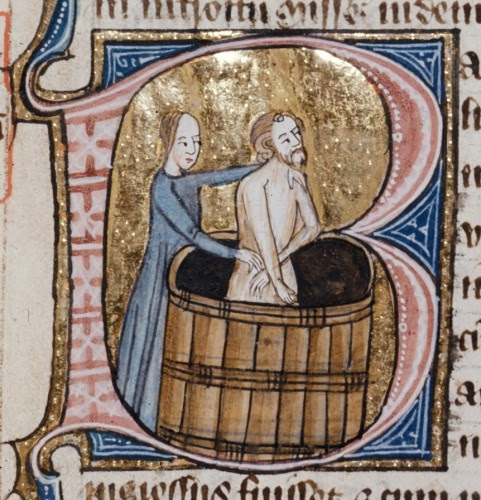 "The sixth century marked the beginning of the Dark Ages in western Europe. While the Byzantine Empire generally prospered, despite its loss of territory, western Europe spent the six centuries after the death of Justinian in chaos, war, cultural degeneration, superstition, ignorance, and poverty. The majority of western Europe, including Italy, Gaul (modern France), and Spain, had fallen to the barbarian tribes who had earlier overtaken Rome. Plague and famine decimated Europe. By 550, Rome, which once had a population of one million people, was reduced to forty thousand souls, half of whom were maintained hy papal alms.

Life was harsh and hrutal. The peasantry, although free, were poor, uneducated, and politically impotent. Skin disease was epidemic because of the Church's prohibition against nudity and bathing. (Other sources indicate that -at least in a later part of the Middle Ages- personal hygiene as well as bathing did exist; TN *). Lice and similar vermin tormented all, regardless of social class. By the beginning of the seventh century, literacy was reserved for the clergy. Science, medicine, and literature were replaced by magic, superstition, and religious texts. Eighty percent of the population during the Dark Ages never moved more than ten miles from their place of birth. As a result of poor nutrition and medicine, the average life expectancy was thirty years, while the average height for men was not more than ﬁve feet three inches (about 160 cm; TN).  Throughout the ninth and tenth centuries, Europe endured a perpetual state of war, decimated by continuous aggression from Scandinavian, castern European, and Germanic trides, as well as Muslims. Savagery and faith, ignorance and piety, agriculture and aggression, this mixture embodied the intellectual stagnation of the Dark Ages."

This blog quotes from Chapter 2 of "The Templars and the Assassins: the militia of Heaven" by James Wasserman (Rochester, 2001); * Additional source on bathing and illustration from  www.medievalists.net

Support TemplarsNow™ by becoming a Patron, tipping us or buying one of our Reliable Books
Email ThisBlogThis!Share to TwitterShare to FacebookShare to Pinterest
No comments: