Financing the Crusades - loans and gifts 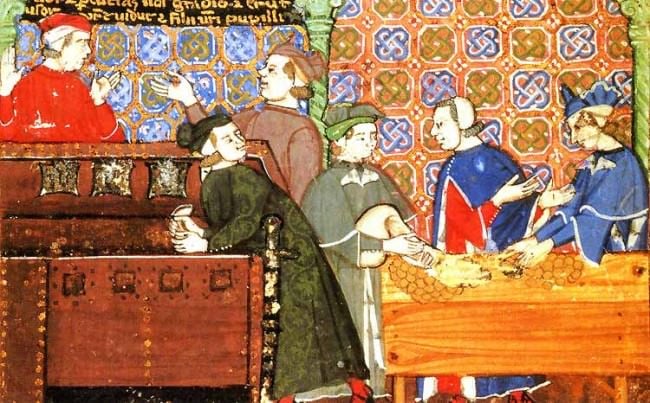 "(It were) loans by which crusaders perhaps most commonly financed their journeys. They borrowed from kings and princes, from monasteries and bishops, from lay lords and merchants, from whoever had money to lend.

The terms of the loans vary. Some were interest-free, like the 70,000 livres of Tours lord Edward of England (the future king Edward I) borrowed from Louis IX in 1269. A recognized form, however, gave the lender the use of the pledged land for a period of years, the income comprising his repayment. Under this vif gage the lender took a certain amount of risk. The more common form of loan, consequently, was the mort gage, which provided for the lender to have the usufruct of the land as interest, the borrower to repay the principal, usually before he got his property back. From the patristic period on, the church had condemned the taking of interest on money loans as usury.

The vif gage was not held to be usurious, since the lender was expected to regain essentially the principal of his loan. The papacy permitted clerical crusaders to pledge their benefices under these terms. Mortgages, on the other hand, fell under the condemnation of pope Eugenius III, and under Alexander III the papacy undertook to enforce its laws against usury. Law-abiding clergy, especially the monasteries, which had found mortgages profitable investments, gave up the business,but other Christians continued to ignore or evade the prohibition of usury. The merchants of southern France and, above all, of Italy were commonly known as moneylenders. ...

Finally, family and friends must often have aided the crusaders. The nature of the transactions did not require written documents to record them, and few examples can be cited. John, lord of Joinville, in describing his departure on the crusade, tells of a gift of "a great quantity of fair jewels to myself and the nine knights I had with me" made by the abbot of Saint Urbain. The kings of England from Henry II to Henry III made considerable gifts to various crusaders.

Again, the social dimension of the crusades is apparent. Although the crusaders took their vows as individuals and were individually responsible for fulfilling them, the crusades were corporate, or at least collective, enterprises. As crusaders joined together to fight under the leadership of feudal lords, communal officers, national sovereigns, and the church, so they also organized their finances, thus transcending the individual."

Blog quotes from Zacour, N. P.; Hazard, H. W. (ed.) / The impact of the Crusades on Europe  (1989), Chapter IV, "Financing the Crusades". The quotes presented here focus on the situation in the first half of the 12th Century. Illustration from medievalists.net