Financing the Crusades - saving and selling 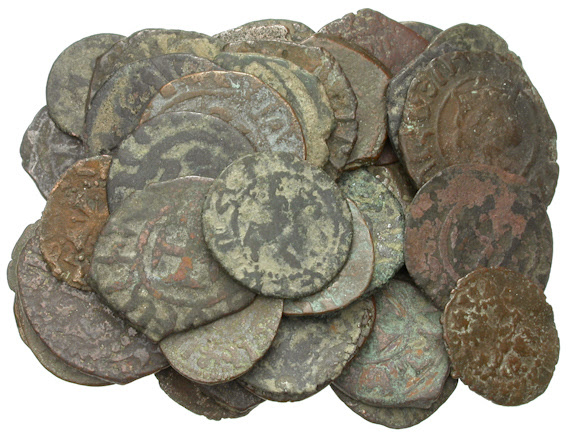 How could the individual crusader finance his journey?

He might look first to his current income, but it will be shown later in this chapter that few crusaders had sufficient cash income both to pay their obligations at home and to support themselves decently on a crusade. If one was wealthy enough to support himself from current income, then he had to arrange to resupply himself with money as he needed it. The Holy Land lay beyond a long and dangerous passage by land or sea, and the receipt of money from home was correspondingly uncertain. ... From the middle of the twelfth century, it is true, the Templars provided facilities for the transfer of crusaders' funds, and merchants came to provide similar services by lending money in the east to be repaid in the west. ...

Many crusaders, however, may have hoped to support themselves with plunder....On the First Crusade the booty of the Moslem armies defeated at Dorylaeum and at Antioch, as well as the tribute and ransom of those who had the misfortune to dwell in the path of the crusaders from Antioch to Jerusalem, all enriched the Christians. Stephen of Blois wrote home from Antioch that he had more silver and gold than when he left France. ... it has been suggested that count Robert II of Flanders may have financed his participation in the First Crusade from his treasury. Stephen of Blois went on two crusades without paying any heed to his financial arrangements, and he may have had sufficient savings....

A large expenditure, such as a crusade, had to be made from his capital, whether chattels or lands. From the First Crusade to the last the alienation of property by crusaders reveals the failure of booty, current income, and savings to support their expeditions.... For the First Crusade Godfrey of Bouillon sold his county of Verdun and other lands to bishop Richer, while for the Crusade of 1101 viscount Odo Arpin of Bourges sold his city and county to king Philip I of France. ...

Crusaders preferred not to sell their property outright. Count John of Macon sold his fief subject to the provision of a life pension for himself and his wife Alix. A lesser English crusader made a gift of land to a religious house in return for which the canons promised to make regular payments to his wife while he was gone on the crusade. For the First Crusade duke Godfrey of Lower Lorraine sold his castle of Bouillon to bishop Otbert of Liege for 1,500 pounds with the right to redeem it if he returned, and duke Robert II of Normandy pawned his duchy to his brother king William Rufus of England for 10,000 marks which William took from the churchmen of England.

Quotes from Zacour, N. P.; Hazard, H. W. (ed.) / The impact of the Crusades on Europe  (1989), Chapter IV, "Financing the Crusades". The quotes presented here focus on the situation in the first half of the 12th century. Illustration: Crusader Coins 11th - 12th century, source. 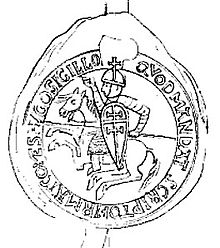 Born around 1074, Hughes is the third son of Thibaud I and Adèle of Valois. In 1089, his half-brother Etienne-Henri succeeds Thibaud I as the head of the Counties of Blois and Meaux. Four years later, on 1 January 1093, Hugh inherited his other brother's Eudes IV Counties of Troyes, Vitry and Bar-sur-Aube. Hughes in 1102 was the first to officially take the title of Count of Champagne. He also was the first to settle in Troyes.

In 1093 (or 1094), Hugues married Constance of France, Dame d'Attigny, daughter of King Philip I and Queen Berthe of Holland. This union was canceled on Christmas 1104 (or 1105), because the couple had not had children. In 1104, he suffered an attack on his life.

Having not participated in the First Crusade, Hughes left for his first three year stay in Palestine (1104-1107).

Back in Champagne in 1107, Hugues married again in 1110 a young girl, Isabelle de Bourgogne-Comté, Dame de Champlitte, daugther of Étienne Ier of Bourgogne and Béatrice of Lorraine.Soon, however, he seeks to repudiate it, at which point the Countess seek the help of the Bishop of Chartres, Yves, who made the count understand that a husband can not be separated from his wife without the consent of her, not even to enter religion.

In August 1114, Hugues de Champagne travel overseas again with his vassal Hugh, lord of Payns, who will establishe in Jerusalem in 1118 the Order of the Temple.

Back in 1116, the count again governed his principality some ten years, promoting the expansion of the new Clairvaux Abbey founded by St Bernard in 1115 and turning his affection on his nephew, Thibaut de Blois, whom he considered as his heir.

But then in 1120 (or 1123), Isabelle gives birth to a son named Eudes. The child was only two years old when Hughes took advantage of a quarrel with his wife to be declared incapable of child bearing by doctors. Considering himself now free of wedlock, he sent away Isabelle and Eudes, abdicated (1125) and sold his heritage to Thibaut IV of Blois who became Count of Champagne under the title of Thibaut II of Champagne. Hughes traveled to the Holy Land where he joined the Order of the Temple.

Usually Hugues' death is indicated Jun 14, 1126. But a charter of the Abbay of Notre-Dame at Josafat indicates that in September 1130 Hughes was still alive. At that time he witnessed, at the side of Guillaume Sénéchal of the Temple in the Holy Land, the donation of an oven and various tithes to the Josafat Abbey. This means that Hughes was still alive when the Templars reveived their first Rule at the Council of Troyes, France (January 13, 1129).

This is a French-English translation by TN of a paper which was once published on the website of univ-paris1.fr. Now the link is broken. Some additional information was added found on this webpage. The information on the 1130 events in the last paragraph came from Hugues de Payns - La naissance des Templiers by Thierry Leroy (2011).

"The Order of the Temple included women"

"The Order of the Temple included women. Within the first years of its existence many women took the Order’s oath, although they remained members of the lay persons’ Temple. While there is no suggestion that there was a secret enclave of warrior queens within the Templar Order, as Michael Baigent and Richard Leigh write in The Temple and the Lodge (1989): …a late twelfth-century account in England speaks of a woman being received into the Temple as a Sister, and seems quite clearly to imply some sort of feminine wing or adjunct to the Order. But no elaboration or clarification of the matter has ever been found.

Even such information as might have been contained in official Inquisition records has long since disappeared or been suppressed. Nicole and Charles, from their close study of Templar documents, are more emphatic: If you go back to the twelfth-century documents, there are numerous instances of women having joined the Order, certainly in its first century. Anybody that joined had to take an oath to give ‘my house, my lands and my body and soul to the Order, of the Temple’. You have women’s names at the end of these documents as well as men’s, and you often have couples joining—so the women must have taken the oath too.

These documents are mainly in this area [the Languedoc], and there are enough instances to show that there must have been quite a large number of women involved at one time. They also point out that there was a later change to the rules, in which the Templars were specifically forbidden from accepting women — with the implication that up until that time they had been doing so.

When we expressed some surprise that this was not more widely known, and certainly, apart from some vague hints, the women’s involvement does not feature in the standard works on the Templars, Charles explained: "At times it appears as though a lot of this information has been intentionally overlooked. What you get in the books is a lot of redundant information, the same thing hashed over and over again. There are only two things it could be: either these people are blind, or for some very specific reason they are not focusing on that information. If you are a researcher, which supposedly these people are, it should leap off the page at you. But it’s dismissed"."