Origin of the Cistercian Order: isolation and poverty 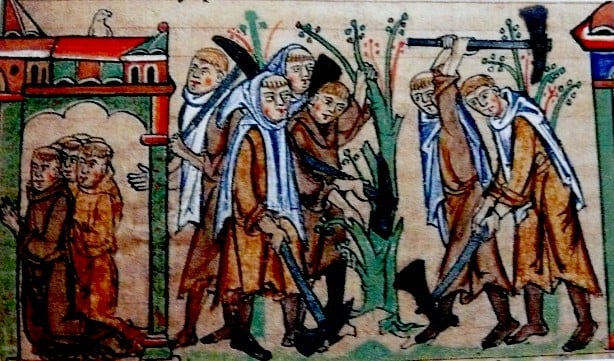 "The self-induced exclusion from the world discussed in the ‘Exordium Parvum’ is perhaps the first instance we see of the ideal of poverty, which became a part of the Order’s mantra.

Burton and Kerr point out that with the ideal of poverty, the author of the text is perhaps trying to conjure a comparison; ‘… embraced that poverty which… at one and the same time evoked the notion of apostolic poverty (making the ‘new monks’ the successors of the apostles as well as the early monks). They also argue that the formation of Cîteaux did not occur in complete isolation at all, and that the location of the founding house as described in the source is a manufactured ideal to reinforce the apostolic imagery and an association with the desert fathers; ‘…the reality of the site of the New Monastery was that it was far from remote but it was integrated into the territorial holdings of Burgundy, not many kilometres from the ducal and ecclesiastical centre of Dijon, and settled enough to have a rural population.’

This is an argument that holds substance, as surely the later recruits that saved and ensured the success of the Order would not have heard of the way of life of the monks if they were so far from society. It seems likely that the founders of the Order sought uncultivated land but within a reasonable distance of the civilised world. Considering the success and riches that the later generations of the Order gained, partly through the cultivation of the isolated lands they were given and other ventures such as sheep-shearing in the desolate lands of Yorkshire, this isolation from the world could be considered as a break away from society to gain land (that their benefactors would not mind bestowing) and to avoid competition from other orders.

However such a view perhaps suggests that the early Cistercians did not hold the values that the Order held with esteem, and were only seeking to gain. It would be wrong to suggest that their search for isolation was borne out of greed, but it is interesting to note that their initial ideal of poverty led the Order to become vastly rich and powerful."

Souce text: thesis by Lori Firth, Hull University (2012): "A Comparison of the Cistercian and Knights Templar Orders, And the Personal Influence of Bernard of Clairvaux", to be found here. References in the source. Illustration