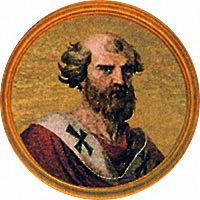 "The second of the papal bulls, ‘Milites templi’ was issued in 1144 by Pope Celestine II. The bull discusses briefly the military aspects of the order; ‘through them that God has freed the eastern church from the filth of the pagans and defeated the enemies of the Christian faith.’ This shows the complete sanction for the military aspects of the order, even the taking of human life, if it means fighting for the Christian realm.

This consent for violence is in stark contrast to other monastic orders, including the Cistercians. The papal bull moves on to petition the clergy to ‘encourage the people that God has entrusted to you to make contributions in order to supply their needs.’ The bull also goes on to explain that there would be spiritual rewards for those that provide support for the brotherhood which was an important privilege for the Order as it ‘helped them to attract and keep new members and attract associates and donations.’

This request of donations and the subsequent wealth which was transferred to the Order is very similar to the beginnings of the Cistercian Order. Though both orders would not allow personal wealth and sought for a life in which to live by the barest essentials, both orders became extremely wealthy in a short space of time. This bull was important because it allowed the order, for a time, to grow at an astonishing rate, as did the Cistercians. "

This blog quotes freely from the thesis by Lori Firth, Hull University (2012):  "A Comparison of the Cistercian and Knights Templar Orders, And the Personal Influence of Bernard of Clairvaux", to be found here. Illustration Pope Celestine II source