Templars at the court of the Counts of Flanders 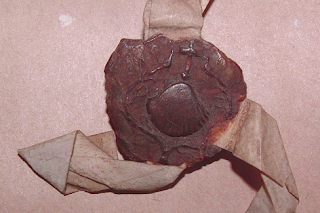 "Ever since the founding of the Templar Order, the Templars had considerable influence on the Counts of Flanders

As early as in 1127 and 1128 Counts William Clito and Derrick, successively, donated the rights to the repay of their personal loans in the County to the Temple Order. Several Flemish noblemen subsequently followed their example. This was an important source of income for the Temple.

Besides that, ever since the reaffirmation of that right by Count Thierry of Alsace in 1157, a Templar Knight, usually the Flemish commander, resided at the Count's court. Not only to to collect taxes but also as a personal adviser and financier of the Flemish count.

One of the main actors in the Flemish scene towards the end of the Templars was brother Peter uten Sacke, also known as Peter Ute Zacke, Uten Zacke, Uten Sacke, Uuttensacke, Pierre dou Sac or Pieron du Sace, du Zac, the Sacco, Brother Pierron of Brother Pierre, "commander" and "master of the Court of the Temple in Flanders (1280 to 1297). He was an influential advisor to the Flemish Count Guy of Dampierre. He lent him money and obtained several important privileges and tiths. The Count donated in 1282 to "his good friend in God brother Pieter uten Sacke of the Temple Order" and to the Temple House near Bruges four acres located in the Aardenburg, for loyal service.

Mid May 1291 Count Guy sent 'brother Peter Utensacke, master of the courts of the temple in Flanders" with Dance Ystaes, monk at Cambron, and Wenin Stullard, bailiff of Ghent, to Ossenisse to assess a complaint of the citizens about the negligence of the Ten Duinen Abbey regarding the dikes. They had to check the accounts and to reach an agreement. In 1302 brother Peter uten Sacke was still present to welcome Brother Thomas Breele in the Temple House Atrecht. Later brother Pieter uten Sacke was one of the councilors of Philip of Chieti, son to Count Guy of Dampierre, who in 1305 became deputy ("Ruwaard") to the count after the rebellion of Flemish artisans."