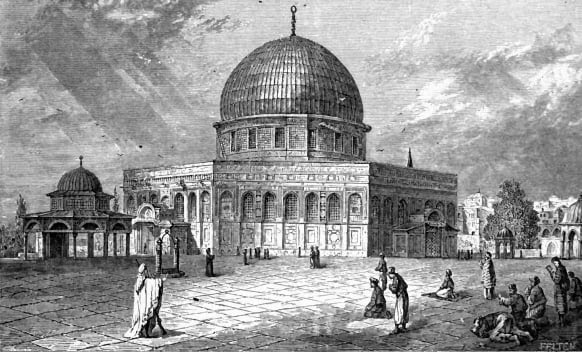 "When Muslim armies came out of Arabia in the 630s and 640s, Christian writers in the Middle East looked to the Bible for understanding about what this invasion meant.

In her article, “Biblical History and the End of Times: Seventh-Century Christian Accounts of the Rise of Islam,” Jessica Lee Ehinger finds that they soon saw this new religion as a sign of the coming Apocalypse.

Starting around the year 634, Islamic armies under Caliph Abu Bakr began incursions into Syria, then part of the Byzantine Empire. After a major Arab victory at the Battle of Yarmuk in 636, Muslim forces were able to quickly conquer most of Syria, including Jerusalem, as well as Egypt. For much of the seventh and early years of the eight century, Arab forces continued to expand Islamic rule through much of the Middle East and North Africa. Ehlinger takes a look at several accounts from the seventh-century, which used Biblical imagery to explain the rise of Islam and portrayed these events as signalling the end of time.

By the early Middle Ages, Christians saw themselves as participants in the great cosmic struggle between good and evil, one that would end in the Apocalypse and the second coming of Jesus Christ. However, it would certainly have appeared odd for Christians that the Arabs (or Saracens as they were often called) would play any role in this struggle. Until this time they were considered to be minor characters in the larger struggles between the Byzantine and Persian empires, and not a people that drew much attention from Christian theologians.

Although they had relatively little Biblical material to work with, seventh-century writers could draw upon the Book of Daniel, which referred to a warrior king emerging from the southern kingdom and conquering much of the world. (...)

Ehlinger notes that by seeing the Islamic invasion as part of God’s master plan, it provided a convenient excuse for the failure of the much more powerful Byzantine armies to contain them, “because, if the Muslims were an aspect of the end, their defeat would be neither be possible nor preferable in view of the greater purpose of bringing about the kingdom of God promised at the end.”(...)

In some cases, Christians saw the Muslim invasions as a punishment from God for their sinfulness. During the siege of Jerusalem in 636, the Patriarch of that city preached a sermon where he said to his followers, “For if we were able to live as is dear and pleasing to God, we might laugh at the fall of our adversaries the Saracens, and presently we might make their ruin feeble, and behold their final destruction.”

However, as history marched on, it soon became clear that Muslim invasions were not signalling the coming of the Apocalypse. Ehlinger writes:


In reality, Muslim rule was neither tyrannical nor even particularly invasive for the indigenous Christian communities who they conquered. Thus, in the centuries that followed, apocalyptic imagery disappeared from Christian writing, as these eschatological overtones must have appeared ridiculous to later Christian writers. The world had not ended, the end had not come, and the Muslims were not the demons and monsters that Christian authors of the seventh-century feared they would be. For later Christian writers, history continued to convey the relationship between God and Christianity, but did so with little regard for Islam or for Muslim rule. Instead, Islam sank into the background of Christian writing, appearing in order to give context and environment but with little consideration for the theological significance of its continued presence. These later authors continued to understand contemporary history as playing out the biblical story, but returned to an understanding in which the biblical end was understood as a distant event; in doing so they came to write works which accepted Islamic rule as the new status quo.

This blog quotes -slightly abbreviated- the paper "How did Christians view the Rise of Islam?" published on www.medievalists.net.; Soucre of text and illustration here