The Knights Templar in Arab sources of the 12th century

In the period 1118-1156, the Military Orders played a relatively minor role in the Holy Land. In fact, they are not well documented even in Latin sources. Among the Arabs their existence went completely unnoticed. In 1157 the rising importance of the Orders began to attract the attention of Muslim writers. The first surviving mention of the Orders is found in Ibn al-Qalanisi's History of Damascus, which mentions the participation of both the Hospitallers and Templars in the battle of Banyas in 1157.

Here we also find the first use of the Arabic technical terms for Templars and Hospitallers. The latter were called simply the isbitariyya, a straightforward arabized form of the Latin word hospitalis, which means a place of lodging for wayfarers. The arab term for Templars, however, is the somewhat obscure dawiyya, whose origin and meaning is unknown but which is thought to perhaps have derived from the Latin devotus, one devoted to God's service.

Most Arab texts from 1157 to 1180 simply mention the Orders as Frankish military units participating in a conflict or owning a castle, without giving them any particular attention. A very revealing tale however comes from Usamah ibn-Munqidh, a Syrian nobleman and lord of Shayzar Castle. He wrote a delightfully garrulous anecdotal biography in which he describes an encounter with the Templar Knights at the Arab alAqsa Mosque on the Temple Mount in Jerusalem, summarized here..

There are a number of interesting aspects to this story. For one thing, it seems the Templars allowed Muslims to pray at the Al-Aqsa Mosque, after it had been converted into a Christian religious complex. Somewhat paradoxically from the modern perspective, for Usamah the Knights Templar are examples of moderate toleration, the voice of reason when compared to the uncomprehending pilgrim from the West. At any rate, Uusamah certainly had no animosity towards the Templars whom he calls his friends. All of this was to change with the rise of the two great counter-crusading Sultans Nur al-Din of Syria (ruled 1146-1174) and Saladin of Egypt and Syria (ruled 1171-1193).

This blog draws freely on the paper "Muslim perspectives on the military orders during the crusades" by William J. Hamblin, published in BYU Studies. Al-Aqsa Mosque, Jerusalem, source Wikimedia Commons 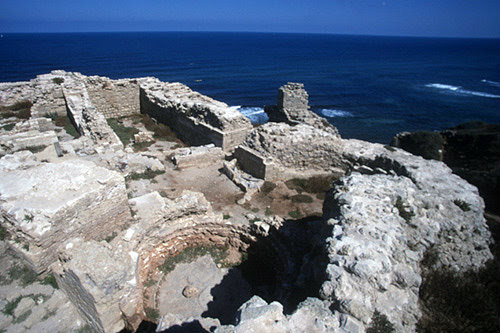 "The “window” of the Apollonia Fortress’ (Israel)  dungeon affords a view of the kind of Mediterranean scene that is fast disappearing: gravel cliffs sloping sharply down to turquoise and pale green inlets, grouper fish darting around a reef, clearly visible in the transparent water, and one man sunbathing on the rocks, completely naked. (...) Crusader nobles awakened to this vista every morning, peering out at the European ships that anchored across from the port and the boats that made their way back and forth to fill the city’s storerooms with precious goods.
Apollonia’s natural harbor never developed into a port as large as Acre, where dozens of ships would anchor in the 13th century, to be loaded with locally- produced sugar bound for Europe. But the ruins of Apollonia are enough to make one see that the constant movement of people, raw materials and cooking techniques was already occurring hundreds of years before the word “globalization” became part of the modern vocabulary.

Sugar cane, lemons, oranges, eggplant, bananas, rice and other agricultural products originally cultivated in the Far East were adopted by Western civilization via the Middle East. The legends that grew up around the West’s first encounters with these unfamiliar foods and the way they spread throughout Europe were largely connected to the Crusades and the knights who flooded the Middle East with blood on their way to the Holy Land. They hungrily gorged themselves on sugary sweets and almonds, it’s said, and brought these treats back with them to their native countries.

But the historic truth, as usual, is a bit more complex, since most of the knights who settled in the Crusader kingdom never returned to Europe. Today it is widely believed that the reconquest of Spain and Sicily from the Muslim Empire, rather than the Crusades, introduced the foods and flavors of classic Arabic cuisine into the lands of the Mediterranean and then to Western Europe.

Whatever the case, the West’s encounter in the Middle Ages with Arabic cuisine, which in many respects was more advanced than Western cooking of the time, was a source of great excitement among the Crusaders. (...)

In the Middle Ages (...) food defined a person’s identity and status in the world. This is true to a great extent today as well, but it was even truer when people believed that the nobleman’s physical build required him to eat the dainty flesh of fish, fragile, high-flying birds, and roast game. A peasant whose body was not designed to digest such foods and nevertheless sampled them, was liable to take sick, according to popular belief at the time, and so he was supposed to make do with simple, crude vegetables that grew close to the ground. Once in a while, the poor would season their bean and root vegetable stew with a paltry bit of fat from an animal’s less desirable parts.

Meanwhile, the upper middle class ate hardly any vegetables. And as for carbohydrates, white bread made from wheat was food for lords only. In Europe, the peasants ate black bread made from rye or oats, and delivered any wheat, a much rarer commodity, to whoever was above them in the social hierarchy. Thus, the Crusaders were quite surprised to find that in the Holy Land, everyone ate white bread and pita made of wheat.

In Europe, cooking employed mainly animal fat, usually lard, and food was so greasy that bumps were carved in bowls to keep it from slipping out of people’s hands. In the Middle East, the main sources of fat were olive oil and sesame oil. 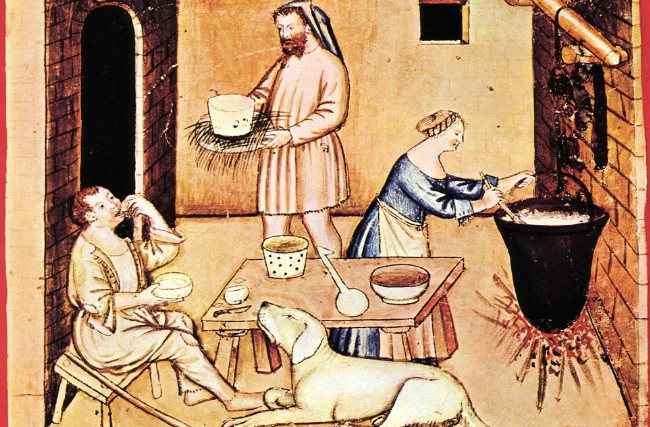 Another surprise was the abundance of available spices and the broad use of herbs. In medieval Europe, food was seasoned primarily with black pepper and a little salt, which was also used to preserve, smoke and dry foods. In Arab cuisine, by comparison, seasoning was considered a real art. Extensive use was made of spices such as ginger, saffron, cinnamon and cloves, which the Arab traders brought from the spice lands of the East, and of seasonings produced from indigenous herbs.

The Crusaders appear to have internalized the principles of seasoning so well that if you tried to follow Crusader recipes exactly as written, you’d end up with dishes quite unappetizing to the modern palate. Seasoning in Crusader times was not just meant to improve the taste of the food, but had a host of other purposes as well. For one thing, it was a status symbol that reflected a person’s ability to purchase expensive spices from faraway markets. And the various colors that spices gave to food had mystical meanings – for example, the golden hue produced by yellow saffron was an allusion to the possibility of eternal life. The spices also had medicinal purposes.

But most often, the heavy seasoning was intended to cover up the awful taste and quality of the raw ingredients. At a time when there was no refrigeration, the meat was frequently in a bad state. Such dubious meat, buried under layers of spices to hide its flavor, gave the central bazaar that served the Crusaders in Jerusalem its name – the Rue de Malquisinat (“The Street of Bad Cooking”)."

Muslim protection of Christian monasticism before the Crusades Although pre-Islamic arabia is often viewed, with some justification, as somewhat of a cultural backwater, the Arabs nonetheless had extensive contacts with both the Sassanid Persian and Byzantine empires.

Through the contacts with Byzantium, and especially through interaction with the Christianized Arab Ghassanid tribe, pagan Arabs first came into contact with Christian monasticism. Arab poets make a few references to Christian monks; one perhaps allegorical allusion describes a Bedouin wandering lost in the desert by night, who sees in the distance the flickering light from the lamp of a monk reading in his cell and finds shelter with him.

But such minor incidental references in poetry are insufficient to give us anything but the vaguest hints about how pre-islamic Arabs viewed monasticism. For a more complete understanding of how the muslim view developed we must turn to the Qur'an, where monasticism is discussed in four passages that laid the foundation for subsequent muslim attitudes toward monks during the crusades. On the positive side, the Qur'an describes monks as leading people near -although not fully- to the path of God.

This positive attitude toward monasticism was further emphasized by the story of the monk Bahira, found in the earliest surviving biography of Muhammad, written by Ibn Ishaq. As a young teenager Muhammad journeyed with a caravan to Syria. (The biography) reveals a number of implicit attitudes about monasticism. First, there is a clear preference in early Islamic sources for hermitic (solitary) monks over coenobitic (communal) monks. The favorably depicted monk in early islamic sources is generally the lone ascetic devoting his life to prayer and contemplation in the wilderness. In a sense, Muhammad himself pursued this ideal for his early biographers describe him as a hanif, a nondenominational monotheist who for one month each year withdrew to mount Hira' near Mecca for tahannuth, devotional prayer and contemplation. (...)

In addition to this basically positive assessment of monks, however, the Qur'an also outlines three major problems with monasticism. First, monasticism places human intermediaries between God and mankind. Second, monasticism was not ordained by God. However well intended, it is a human invention. Finally, monks are accused in the Qur'an of corruptly using their positions as rulers in society to garner personal wealth and power.

Yet, despite the problems with monasticism enumerated in the Qur'an, monks -and Christians in general- were considered "People of the Book", followers of God who had received an early portion of God's revelation but not the fullness revealed to Muhammad in the Qur'an. As such they became a tolerated religious minority within Islam. This attitude is reflected in the early Islamic conquests in the seventh century, when the churches and monasteries of the Christians were given special protection in peace treaties. (...) Thus, since the earliest days of Islam, monasticism was a protected institution of a protected religious minority.

This blog draws freely on the paper "Muslim perspectives on the military orders during the crusades" by William J. Hamblin, published in BYU Studies.Illustration: Muhammad's encounter with the Christian monk Baḥīrā, source