The Toledo School of Translators is the group of scholars who worked together in the city of Toledo during the 12th and 13th centuries, to translate many of the philosophical and scientific works from classical Arabic, classical Greek, and ancient Hebrew.

The School went through two distinct periods separated by a transitional phase. The first was led by Archbishop Raymond of Toledo in the 12th century, who promoted the translation of philosophical and religious works, mainly from classical Arabic into Latin. Under King Alfonso X of Castile during the 13th century, the translators no longer worked with Latin as the final language, but translated into a revised version of Castilian. This resulted in establishing the foundations of the modern Spanish language.

Traditionally Toledo was a center of multilingual culture and had prior importance as a center of learning and translation, beginning in its era under Muslim rule. Numerous classical works of ancient philosophers and scientists that had been translated into Arabic during the Islamic Golden Age "back east" were well-known in al-Andalus (Islamic-era Spain) such as those from the Neoplatonism school, Aristotle, Hippocrates, Galen, Ptolemy, etc., as well as the works of ancient philosophers and scientists from Persia, India, and China. These enabled Arabic-speaking populations at the time (both in the east and in "the west" or North Africa and the Iberian peninsula) to learn about many ancient classical disciplines that were generally inaccessible to the Christian parts of western Europe, and Arabic-speaking scientists in the eastern Muslim lands such as Ibn Sina, al-Kindi, al-Razi, and others, had added significant works to that ancient body of thought.

Some of the Arabic literature was also translated into Latin, Hebrew, and Ladino, such as that of Jewish philosopher Moses Maimonides, Muslim sociologist-historian Ibn Khaldun, Carthage citizen Constantine the African, or the Persian Al-Khwarizmi.

Spain's multi-cultural richness beginning in the era of Umayyad dynasty rule in that land (711-1031) was one of the main reasons why European scholars were traveling to study there as early as the end of the 10th century. As the Arabic-speaking rulers who initially came in 711 intermingled and intermarried with local populations, the co-existence of Arabic, Hebrew, Latin, and the local Romance vernacular had seen the emergence of new pidgin vernaculars and bilingual song forms, as well as the creation of new bodies of literature in Arabic and Hebrew. The environment bred multi-lingualism. This era saw the development of a large community of Arabic-speaking Christians, known as (Mozarabs), who were available to work on translations. But translating efforts were not methodically organized until Toledo was reconquered by Christian forces in 1085. The new rulers inherited vast libraries containing some of the leading scientific and philosophical thought not only of the ancient world, but of the Islamic east, the cutting edge of scientific discourse of the era—and it was all largely in Arabic.

Another reason for Spain's importance at the time is that Christian leaders in many other parts of Europe considered many scientific and theological subjects studied by the ancients, and further advanced by the Arabic-speaking scientists and philosophers, to be heretical. The Condemnations of 1210–1277 at the medieval University of Paris, for example, were enacted to restrict the teachings of several theological works, among which were the physical treatises of Aristotle and the works of Averroes (the Latinized name of the Muslim philosopher-physician of al-Andalus, Ibn Rushd).

The translations of works on different sciences, such as astronomy, astrology, algebra, medicine, etc. acted as a magnet for numerous scholars from all over Europe who came to Toledo eager to learn first hand about the contents of all those books that had been out of reach to Europeans for many centuries. Thanks to this group of scholars and writers, the knowledge acquired from the Arab, Greek and Hebrew texts found its way into the heart of the universities in Europe. Although the works of Aristotle and Arab philosophers were banned at some European learning centers, such as the University of Paris in the early 1200s, the Toledo's translations were accepted, due to their physical and cosmological nature.

The Knights Templar and "Solomon's Stables" 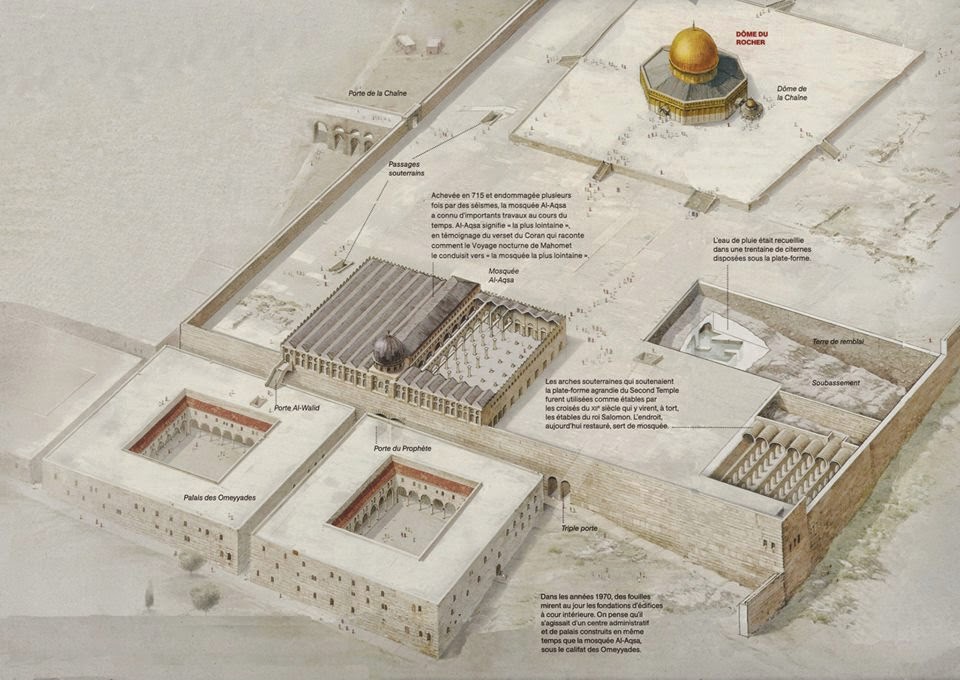 The Knights Templar are said to have been using Solomon's Stables, vaults below the Temple Mount at Jerusalem. These "Stables" were in fact vaulted cellars built by Herod the Great, meant to support the huge platform of the Temple Mount when he enlarged and remade the second temple in the 1st century BC.

This huge scaffolding reached 45 metres above ground level at the southeast corner of the Temple Mount. It is estimated that there are four levels of vaults. However, only the highest level is accessible, although for the moment it is not open to tourists. The Umayyads re-used the Herodian masonry to restore this last level between the end of the 7th century and the early 8th century.

And the Templars rebuilt later arcs. Apart from the structural support offered first for the Temple Mount platform and then to the Al-Aqsa mosque built at this location, these caves possibly served as spare rooms for the Temple of Herod. The Templars were probably the first to make them stables.

A short tunnel runs from the south retaining wall of the Temple Mount under "Solomon's Stables." After 30 meters, the tunnel is blocked by rocks and debris and archaeologists have not been able to conduct investigations beyond because of the refusal of Muslim authorities. However, given the tunnel construction method, often with large blocks dating from the time of Herod's Temple, archaeologists have concluded that it was built as a postern (a secret gateway) by the Templars.

The entrance would have been located somewhere on the surface and the exit at the south wall, allowing the Templars to launch surprise attacks against their enemies.

Today this place being restored, has been transformed into a place of prayer the Al-Marwani mosque.

Illustration from, and tekst translated from French to English from a Facebook-post of Temple de Paris ©