Development of the trade system in the 10th to 12th century 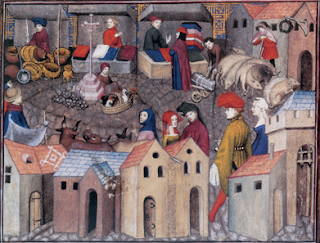 For a better understanding of the origin of the Medieval military Orders in general and the Knights Templar in particular, it is necessary to understand the trade system in the 10th to 12th century.

The Medieval Revival of Trade in this period merits some extra attention. Two sorts of commercial activity were most important after 1050. Locally, surplus grain and products from small industries were sold at markets and entered long distance trade. This was especially so in textiles, wine, and luxury items.  How and why did this occur?

Important was that the Mediterranean reopened after the Italians defeated Muslim raiders. Italian cities, which took a leading role in the revival of commercial activity, traded with the Byzantine Empire. Europeans wanted silks, spices, and other luxury items from the east. Venice, Genoa, Milan, and Pisa (on routes between E and W) became market centers.

Elsewhere trade developed between Scandinavian cities and cities along the Atlantic coastline as well as between England, northern France, and Flanders; and along the rivers linking the Baltic Sea with the Black Sea and Constantinople.

Because of this development, trade expansion made necessary the creation of new forms of business organization (partnerships). This involved a money economy and a money-changing or banking system. Trade stimulated the development of trade fairs in the Champagne (France) and elsewhere.  Medieval trade revival laid foundations for the development of a modern market economy which eventually evolved into capitalism. This greater commercial activity also stimulated the growth of towns which in turn stimulated even greater economic growth.

This text is an elaborated version of Lecture Notes on "The Legacy of the Roman Empire and the Middle Ages in the West (ca AD 500-1450/1500)" from the University of North Caroline at Pembroke. source www.uncp.edu; source illustration thumbsbeastsandthieves.wordpress.com
No comments: