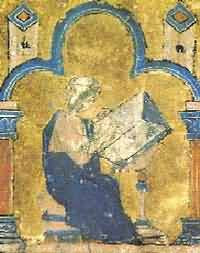 William of Tyre, in his Historia rerum in partibus transmarinis gestarum, gives the following account of the foundation of the Order of the Knights Templar:

"In this same year [1118, TN] certain noble men of knightly rank, religious men, devoted to God and fearing him, bound themselves to Christ's service in the hands of the Lord Patriarch. They promised to live in perpetuity as regular canons, without possessions, under vows of chastity and obedience. Their foremost leaders were the venerable Hugh of Payens and Geoffrey of St. Omer. Since they had no church nor any fixed abode, the king, gave them for a time a dwelling place in the south wing of the palace, near the Lord's Temple.

The canons of the Lord's Temple gave them, under certain conditions, a square near the palace which the canons possessed. This the knights used as a drill field.

The Lord King and his noblemen and also the Lord Patriarch and the prelates of the church gave them benefices from their domains, some for a limited time and some in perpetuity. These were to provide the knights with food and clothing. Their primary duty, one which was enjoined upon them by the Lord Patriarch and the other bishops for the remission of sins, was that of protecting the roads and routes against the attacks of robbers and brigands. This they did especially in order to safeguard pilgrims.

For nine years after their founding, the knights wore secular clothing. They used such garments as the people, for their soul's salvation, gave them. In their ninth year there was held in France, at Troyes, a council at which the Lord Archbishops of Reims and Sens and their suffragans were present, as well as the Bishop of Albano, who was the legate of the apostolic see, and the Abbots of Citeaux, Clairvaux, Pontigny, with many others. This council, by command of the Lord Pope Honorius and the Lord Stephen, Patriarch of Jerusalem, established a rule for the knights and assigned them a white habit.

Although the knights now had been established for nine years, there were still only nine of them. From this time onward their numbers began to grow and their possessions began to multiply. Later, in Pope Eugene's time, it is said that both the knights and their humbler servants, called sergeants, began to affix crosses made of red cloth to their mantles, so as to distinguish themselves from others.

They have now grown so great that there are in this Order today [William was writing c. 1170-74] about 300 knights who wear white mantles, in addition to the brothers, who are almost countless. They are said to have immense possessions both here and overseas, so that there is now not a province in the Christian world which has not bestowed upon the aforesaid brothers a portion of its goods. It is said today that their wealth is equal to the treasures of kings. Because they have a headquarters in the royal palace next to the Temple of the Lord, as we have said before, they are called the Brothers of the Militia of the Temple.

Although they maintained their establishment honorably for a long time and fulfilled their vocation with sufficient prudence, later, because of the neglect of humility (which is known as the guardian of all virtues and which, since it sits in the lowest place, cannot fall), they with drew from the Patriarch of Jerusalem, by whom their Order was founded and from whom they received their first benefices and to whom they denied the obedience which their predecessors rendered. They have also taken away tithes and first fruits from God's churches, have disturbed their possessions, and have made themselves exceedingly troublesome."

This text is part of the Internet Medieval Source Book. The Sourcebook is a collection of public domain and copy-permitted texts related to medieval and Byzantine history. source www.fordham.edu; illustration source wikipedia.org