The socio-economic system of the 10th to 12th century 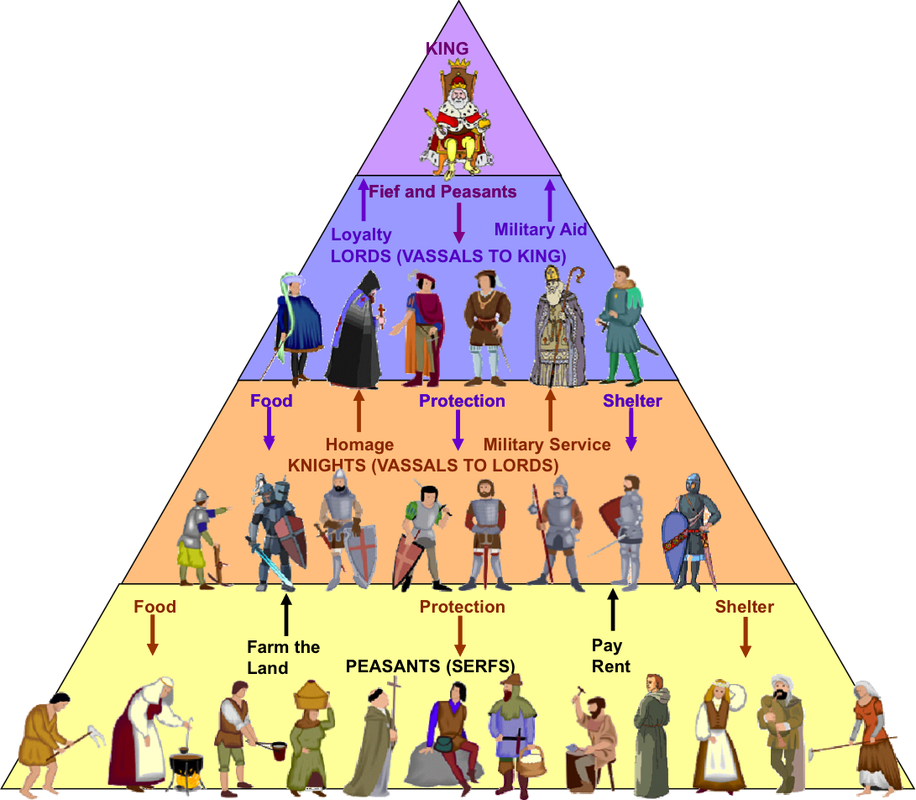 For a better understanding of the origin of the Medieval military Orders in general and the Knights templar in particular, it is necessary to understand the socio-economic system in the 9th to 12th century.

The Ninth and tenth centuries were marked by:

1) the decline of the monarchy and the rise of great nobles;
2) the development of feudalism and manorialism;
3) the Church becoming bolder in its claims for power and independence and in its effort to assert its superiority over the state, thus setting the stage for one of the great struggles of the High Middle Ages;
4)  invaders from the north devastating Europe in the 9th and 10th centuries, bringing about a political, economic, social, and cultural decline almost as severe as that which followed the fall of Rome.

Some of these invaders, we might note, claimed land and settled down, like the Normans in Normandy in 911 and others in England and Ireland.  Only about 987, when Hugh Capet is crowned king of France, does it appear that this general decline will be halted and then reversed


Feudalism as a political institution and manorialism as the socio-economic system that supported society to emerge from the wreckage of the Carolingian Empire in the 9th and 10th centuries.  Feudalism was necessary due to the decline of a powerful centralized government in the years after 814. Political, military, judicial, and other functions of government became to be exercised at the local level. Feudalism was a political arrangement that provided for the performance of these functions of government by a class of landed nobles. Nobles were bound by an interdependent system of personal ties. The heart of the system was the feudal contract, which established relations between lord and vassal, the most important of which were protection and service.  The noble class developed a value system (later called chivalry). Knights were to be Christian, brave, faithful, generous, and protective of women and the poor. Evidence of this code may be found the French epic The Song of Roland and the Spanish El Cid.

Manorialism:  Power and prestige of the noble class was based on land (the fief), which supported the lord, his family, and his soldiers.  Landed estate became organized as manors, each manor being a a self-supporting economic unit. The lord provided the land and protection, serfs (=landless peasants) provided the labor.

These serfs were bound to the soil which could not be bought or sold individually. They passed new owners when land changed hands.  Medieval farming methods were primitive, and yield was low.  The three-field system was used, with one field planted in the autumn, one in the spring, and one fallow. Cultivated fields were farmed in strips, largely because of the turning radius of the heavy plow. Serf's life was difficult and usually short; a serf usually lived out his entire life without leaving the manor upon which he was born. He owed his lord labor on the lord's land. He paid the lord in kind to have his wheat ground, his bread baked, and his grapes pressed. He also owed his lord labor on roads and buildings. He could not leave the manor without his lord’s permission and his marriage might be arranged by his lord. In return, the serf had the right to live on the manor and to farm his strips of land.  A certain degree of security and order governed the serf's existence.

This text is an elaborated version of Lecture Notes on "The Legacy of the Roman Empire and the Middle Ages in the West (ca AD 500-1450/1500)" from the University of North Caroline at Pembroke. source www.uncp.edu; Source illustration  google