Aristocratic and monastic primacy in the 12th century County of Champagne, France 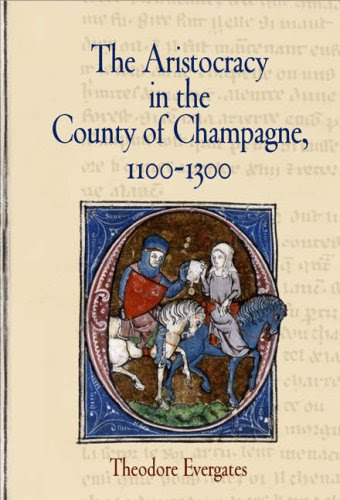 , Theodore Evergates sketches the administrative situation in the County of Champagne, France in the 12th century. Champagne is the birth place of the Cistercian monastic Order, and also played an important part in founding of the Knights Templar. Evergates summarizes the setting as follows:

"The area around Champagne remained a highly fragmented frontier zone between the French royal domain and the German Empire, extending from Burgundy in the south to Namur in the north. It remained independent because the surrounding counties around Reims, Châlons and Langres became episcopal principalities in the course of the tenth and eleventh centuries. Of the old episcopal cities in Champagne, only Troyes and its county remained under a firm lay hand of the counts of Champagne, a comital state from virtually independent lesser regional princes.

The county of Champagnes was in  fact a fusion of the old major counties of Meaux and Troyes, and a combination and adjacent lordships ruled by the family of Hughes Comte de Champagne (1093-1125) both before and after his rule. Hughes preferred the title Comte de Troyes over the broader title Comte de Champagne, Troyes being his primary residence, the most important and only episcopal town.

As all worldly rulers of those days, Hughes was most occupied by resolution of disputes regarding monastic property as is recorded by documents.These documents were drawn up and preserved by monastic scribes, Hughes lacking a proper chancery and clerics to write and record documents or maintain and archive his correspondence. Altogether perhaps 1000 documents survive from the first half of the 12th century, of which a quarter is held at the archives of Molesme Abbey, progenitor of the Cistercian Order.

Hughes abdicated in 1125 when he decided to join the Templar Knights, recently founded by one of his barons Hughes de Payns, and was succeeded by his uncle Thibault. Shortly after Thibault succeeded Hughes, he confirmed and sealed a document recapitulating count Hughes' grants to the monks of Molesme in 1097, 1104 and 1108.

Thibault continued to develop the County, introducing immigrants to help develop the sparsely populated countryside. He enticed merchants to the new trade fairs in his own towns on the route between northern Europe and the Mediterranean, setting a model for protected and regulated places for trade.

source The Aristocracy in the County of Champagne, 1100-1300 (The Middle Ages Series)