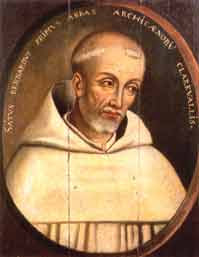 The ninth centenary of Bernard de Fontaine’s entry into the Abbey of Cîteaux (1112 or 1113?) was celebrated during the Vocations Year 2012-2013. After founding Clairvaux Abbey in 1115 Bernard became better known as Bernard de Clairvaux, the spiritual leader of the Cistercian Order and (after 1127) of the Order of the Knights Templar.