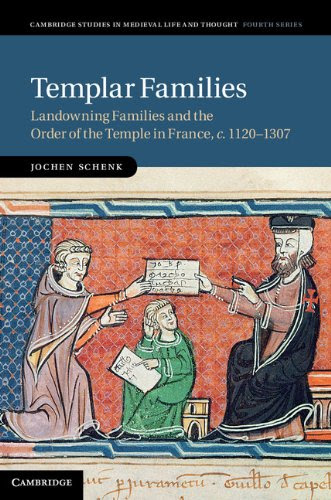 Through kindred the Order of the Temple maintained close ties with leaders of society. These relationships were mutually beneficial. What was the situation in the the duchy of Burgundy, the county of Champagne, and the area that is now commonly referred to as Languedoc in southern France?

In his book "Templar Families: Landowning Families and the Order of the Temple in France c 1120 - 1307" ( 2012 Cambridge University Press, Cambridge, UK) Jochen Schenk investigates how commonplace these ties, contested as they may have been, were in regions where the Order of the Temple demonstrably flourished and what it was that brought this about.

"What seems to have predisposed some knights and nobles to embrace the Order of the Temple as a new religious institution worthy of association and patronage, was the fact that they and their families were already heavily involved in the Order of Cîteaux (the Cistercian Order, TN) and were able to reconcile the concept of military religion with reform monasticism. This is one strand of influence that so far has not been given much attention and that this book aims to follow up."

"The first decades of the twelfth century not only witnessed the rise of the Templars in Burgundy and Champagne. It was also the time of rapid Cistercian expansion in the region, an expansion that was largely fed by benefactions and recruitment from the same families that one encounters in Templar charters and that benefited greatly from the support of the bishops of Langres. Sympathy for reformist ideas as expressed by the Cistercians (but also by Carthusians and others) and engagement with the Templars, in other words, seem to have gone hand in hand in many families and were also found in a number of senior ecclesiastics who often shared the social background of the knights and nobles among whom the Templars recruited most heavily."

Source Templar Families: Landowning Families and the Order of the Temple in France, c.1120-1307 (Cambridge Studies in Medieval Life and Thought: Fourth Series)