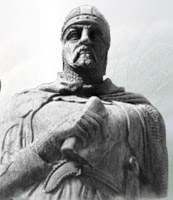 The years 1114 till 1129 are key years of history of the Knights Templar: the years. What happened in that timespan? The source of this blog provides historical context as well as creative thinking and myth building. What do you think?

"We have seen in the overview, that the Order of the Temple was officially born in the Holy Land in 1118 (probably early 1119). However, we note that the official recognition of the Order in 1118 (probably early January 1120 at the Council of Nablus, TN) is only the continuation of a "mission" or "investigation" started nearly 10 years earlier ...

It has been demonstrated and accepted by all historians that Hugues de Payens has made at least two (pilgrimage, TN) trips to the East after the First Crusade, in 1104-1105 and 1114-1115, both times in the party of Count Hugues de Champagne.

It is worth pausing for a moment on the person of the Count of Champagne. He is one of the leading feudal vassals of the French kingdom, about 4 to 5 times richer than the King of France himself! Very influenced by a religious mysticism, his links with Stephen Harding, abbot of Citeaux, who reformed Benedictine thought to form the Cistercian movement, were close. These links are so close that in 1115 Stephen Harding let come to Citeaux Abbey a Cistercian monk from the Abbey of La Chaise-Dieu, a specialist in Hebrew texts. In 1115, after the return from the East of the Count of Champage, right ...

The same year, the same Count of Champagne takes under his direct protection a young monk of Citeaux, Bernard, offering him an estate under his control at Clairvaux. After that Clairvaux Abbey and the thought of the future St. Bernard of Clairvaux reigns throughout all the Christian world during the twelfth century ...

In 1118, we find among the "new" founders of the Knights Templar a certain André de Montbard. He is no more or less than the uncle of Bernard of Clairvaux. It is worth recalling that the 1129 Council was held at Troyes, the homes of Hughes de Payens and the Count of Champagne, who will join the Templars in 1126after having abandoned his wife, children, wealth and power... Doing so putting himself under the command of his former vassal Hugues de Payns.


Bernard of Clairvaux who, if it is not established that he effectively directed the Council, did at least influence greatly the drafting of the rule of the Order, by introducing the concept of the soldier-monk in the strict line of his thought urging the nobility to give up private wars, to serve the faith instead.

1104-1105: Hugues de Payens and the Count of Champagne travel to the East on pilgrimage

1114-1115: Both Hughes leave again for the East. Hugues de Payens stays there, that is certain. The Cistercian Abbey at Citeaux begins studying Hebrew texts. The Count of Champagne takes Bernard under his protection and gives him land at Clairvaux.

1119: The uncle of Bernard, (André de Montbard,TN) is with Hugues de Payens when the Patriarch of Jerusalem grants them for residence "Solomon's Temple" in 1118.


1119-1126: The black hole. We know only that the Templars conducted excavations beneath the Temple of Solomon. There is no evidence or disproof on new return trips between Jerusalem and Champagne. There are no combat achievements attributed to the Templars during these years.

1126: The powerful Count of Champagne divorces his wife and children, abandoned his wealth and power to join the Templars, under the command of Hugues de Payens, his former vassal.

1127: Return to Champagne of Hugues de Payens and five Knights Templar. They visit the January 1129 Council of Troyes that, under the leadership of Stephen Harding and Bernard of Clairvaux, formalizes and grants the Order of the Temple its rule and sets the scene for total independence from secular clergy and temporal sovereigns.

Things are clearer now. The origin of the creation of the Knights Templar is pretty much a family affair and everything revolves around the Count of Champagne and of the Cistercian movement: the leading creators and their mentors are from the County of Champagne, their other companions originate form the house of the Princes of Flanders, crusaders and pilgrims of the first hour. Remains the motif, the purpose, the goal ...

Order illuminates the religious foundation and even mystical origins of the Order. Do not be naive. Technically only nine knights could not protect the pilgrim roads that were in constant contact with the enemy. Even more so during 10 years without recruiting, what the fortune of the Count of Champagne could just permit. One of the richest princes of the kingdom of France does not abandon his riches and his family to monitor the roads under the orders of a vassal, even the deepest faith (a view which does not take into account the deep religiosity of the people of the time, TN). There was something else.

They went looking for something in the East. Something essential for religion of Bernard and Etienne.Something that could be found only in the Holy Places. Something so secret that only the Pope after that controls the Order. Something so great that only blood relations of the founders can protect it...

Everything becomes clear. The scouting trips of 1104 and 1114. The study of Hebrew texts in 1115 at Citeaux. The excavations under the Temple of Solomon in 1118. In 1126 they found ... and the Count of Champagne abandons everything and joined the Order. In 1127 it is judged necessary to protect the secret. The Council of Troyes renders the Templars untouchable and transforms it into a defense army of the Holy Places.

BUT WHAT DID THEY LOOK FOR, FIND OR THOUGHT TO HAVE FOUND?

The Holy Grail? Architectural secrets that would spread Gothic art form the twelfth century onwards? The Ark of the Covenant? Some esoteric knowledge related to Islam? Nobody knows and can be certain... One thing is certain. The creation of the Order of the Temple was not made for the the simple purpose of protecting pilgrims on the road. It responded to an instruction well considered to go on a mystical quest sponsored by the Cistercian monks Stephen Harding and Bernard of Clairvaux."

This blog quotes a slightly edited translation by TN of the publication in French by Philippe Vincent. Illustration Hugues I de Champagne source