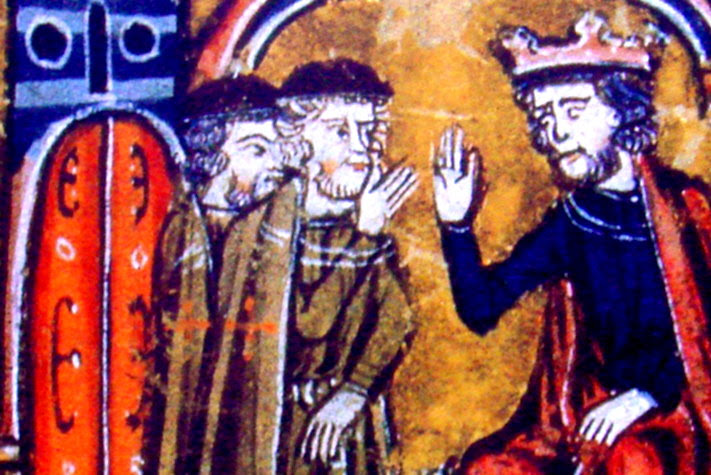 In his book The New Knighthood: A History of the Order of the Temple Malcom Barber reconstructs in detail the birth of the Order. This blog freely quotes key passages, occasionally adding some details from other sources like Wikipedia.

Chronicler William of Tyre reports that at least the two worldly knights Hugh of Payns (in the Earldom of Champagne, France) and Godfrey of Saint-Omer (in Picardy, France), took vows of poverty, chastity, and obedience at the hands of Warmund of Picquigny, Patriarch of Jerusalem.

They promised to devote themselves to God’s service in the manner of regular canons.Subsequently king Baldwin II, who succeeded his cousin Baldwin I at Easter 1118, gave them a base in his palace, to the south side of the Temple of the Lord, which was the name given by the Franks to the Dome of the Rock. This sequence of events sets the oldest possible date for the origin of the Order at or probably shortly after Spring 1118. However, most pobably this brotherhood already existed informally for some years as one of the the brotherhoods of the Holy Sepulcher, related to the Knights Hospitaler.

It is possible to be more precise about the date of the formal recognition of the Templars in a wider sense. Among the early grants to the Order was one by Thierry, Count of Flanders, dated 13 September 1128, which states that it was made in the ninth year from the Order’s foundation’, setting this foundation in 1119. As this grant was actually made in the presence of Hugh of Payns, it must be more reliable evidence than the earlier year 1118 given by William of Tyre, whose reputation for faulty chronology is well known and who was writing over half a century later. Nor is William consistent, for he says later in the same passage that the Council of Troyes, at which the Templars received official papal recognition, occurred in their ninth year. Jean Michel, the scribe who wrote down the council’s proceedings, dates his record as the Feast of St Hilary (13 January) 1128, ‘the ninth year from the beginning of the aforesaid militia’, information which, like Count Thierry’s scribe, he must have obtained from Hugh of Payns himself, since he was present at the council. This also sets the foundation in the year 1119 following uncorrected time reckoning of those days.

But Rudolf Hiestand has shown that this date should be corrected to january 1129, in accordance with the contemporary French practice of beginning the year on 25 March. Therefore, the official date of the foundation or at least formal recognition in the Holy Land must fall in January of the year 1120.