"The Vatican Secret Archives preserves the surviving acts of the papal inquiry on the Knights Templar Order, conducted in Poitiers in 1308. These were published in a  bilingual (Italian-Englishg) version. The worldwide premiere was held at the Vatican on October 25, 2007, attended by high Vatican officers, members of the diplomatic body from the Holy Site, academics from Vatican universities, as well as outstanding representatives from the military, politics, professional associations and institutions.

Years of research and organization, conducted by the Vatican Secret Archive on its source material, have made possible the publication of Processus Contra Templarios, the exclusive and previously unavailable hearing of the original acts of the ancient trial against the Templar Knights.

A unique project in the world, this work comes in a limited run of 799 copies, under the supervision of the Papal Archive officials, and includes the faithful replicas of the original parchments kept at the Secret Archive along with a new and exclusive critical edition on the minutes of the inquiry.
A thorough analysis of the original parchments, performed through the technique known as “Wood lamp”, which allows the recovery of parts of text unattainable to previous publishers, has made possible for the supervisors to amend older editions, so as to afford a more accurate and genuine reading of the documents.

The filing of pre-existing sources has indeed allowed to recover misinterpreted text sections as well as standardize  designations for both people and locations. Therefore, the Vatican Secret Archive gives academics and interested subjects access to a precious and scientifically reliable tool of research into the historical facts related to the Templar Order.

Further to the record and transcription of papers and parchment documents, a section focuses on the review of the Templar history and on the trial against them.

This publication is mostly valued with regard to its documents and critical texts, which help throw light onto the events which led the pontiff to acquit the Templar Order from the accusation of heresy.
Clements V suspended the Templar Order, without disbanding it, and he eventually admitted the high Templar dignitaries and the entire Templar Order back into the Roman Church community. "

On the "Templar" graffitti at Domme, France 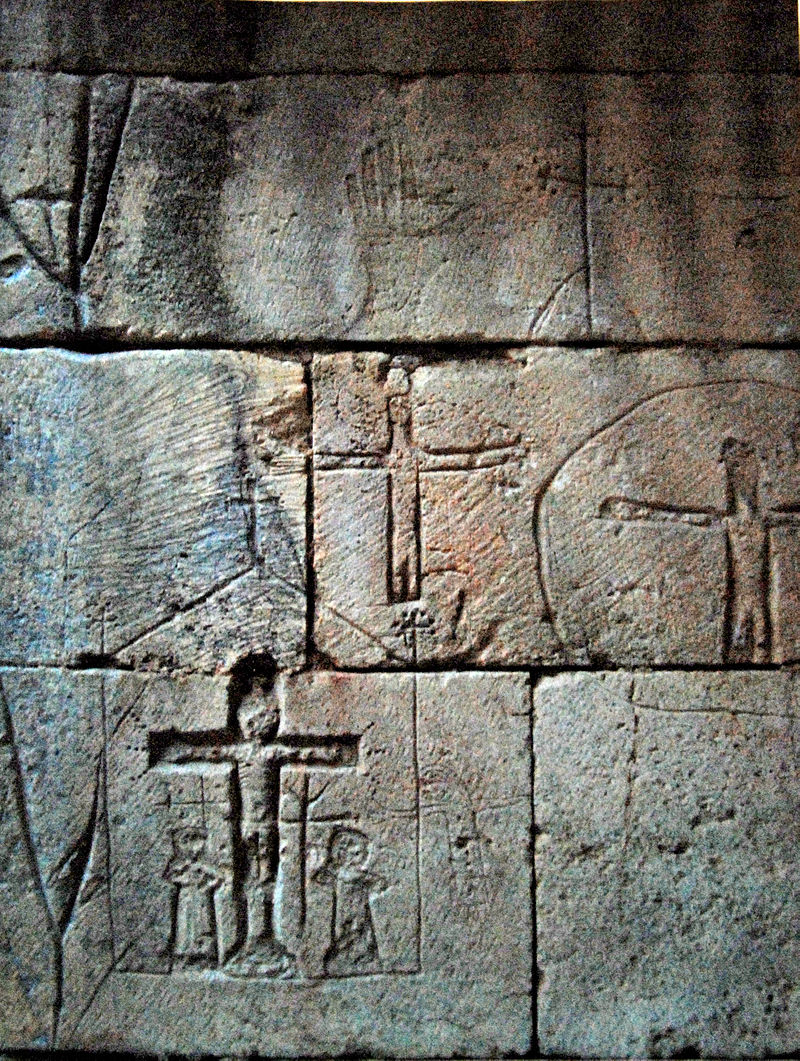 "There are Templar graffiti in the dungeon at Warwick Castle in England and at Chinon Castle in France. But by far the strangest and most intriguing examples are to be found at the guardhouse at Domme, in south-western France.

Traces of the order that have been unaccountably overlooked in the thousands of pages written about the Templars. These wall carvings are as close to first-hand Templar writings are we are ever likely to get, so when the opportunity arose to take a close look at them I seized my camera and sallied forth. Little did I suspect that what I was to find would leave me astonished and engulf most of my spare time in the following months as I became driven by the need to comprehend what the Templars had left behind on the walls of this terrible place. "

Notwithstanding the repetition in popular Templar publications of enthousiastic descriptions as the above, rock solid evidence on a certain Templar origin of the grafitti is missing. The same is the case with similar grafitti from elsewhere. Recent research at Domme even concluded that " the grafitti would perhaps be posterior to the time of the Templars. No traces were found attesting that the building served as a prison for incarcerating Templar Knights there at the time (1307). However, the patterns at Domme suggest at least a relationship with Jerusalem and crusading. This is documented by the many pictures available on the internet such as here and here. Whether the grafitti were done by crusaders, Templar or not, living at the building free or captive may remain hidden in history, though it seems possible.